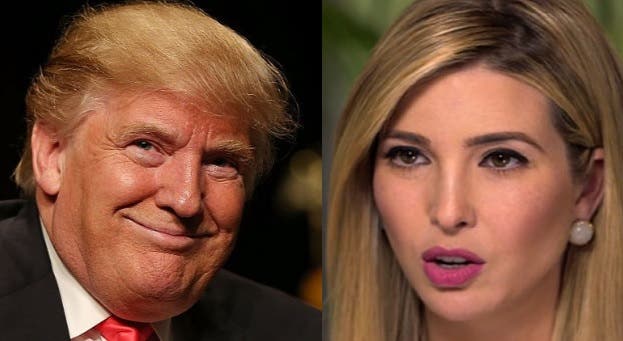 President-elect Donald Trump is a serial sexual predator who has been accused by numerous of women of assaulting them. Trump even admitted to sexually assaulting women on a recording which was made in secret in 2005 when he said he grabs women “by the pus*y”, and that he continues to get away with the crimes because he is rich and famous.

This, however, did not stop the American people from elevating him to the most powerful position in the world as the soon to be 45th President of the United States. Trump’s eldest daughter, Ivanka Trump, knows her father better than most and in the year following Trump’s secretly recorded admittance of his crimes she said if he wasn’t her father she’d spray him in the face with mace.

The comments from Ivanka Trump came after her father said on the March 6, 2006 episode of The View, “I’ve said if Ivanka weren’t my daughter, perhaps I’d be dating her.”

Relive that fatherly moment below:

In response Ivanka Trump was quoted by the Chicago Tribute on August 24, 2006 saying, “If he wasn’t my father, I would spray him with Mace.”

In the last 10 years Ivanka Trump’s tune has certainly changed since her father turned to the political arena. After Trump’s dastardly despicable comments about sexually assaulting women came to light Ivanka said:

My father’s comments were clearly inappropriate and offensive and I’m glad that he acknowledged this fact with an immediate apology to my family and the American people.

Ivanka Trump has taken over her father’s business day-to-day operations and has clearly learned the art of political doublespeak. She is also paying the price for her father’s political rhetoric as her overpriced and cheaply made clothing items have been pulled from sale by numerous retailers. Ivanka Trump said in response, “We are proud that our business is growing rapidly and that our brand resonates strongly with women who are inspired by our messaging.” Right, and that message seems to be that Ivanka Trump condones her father’s disgusting inhumane treatment of women.