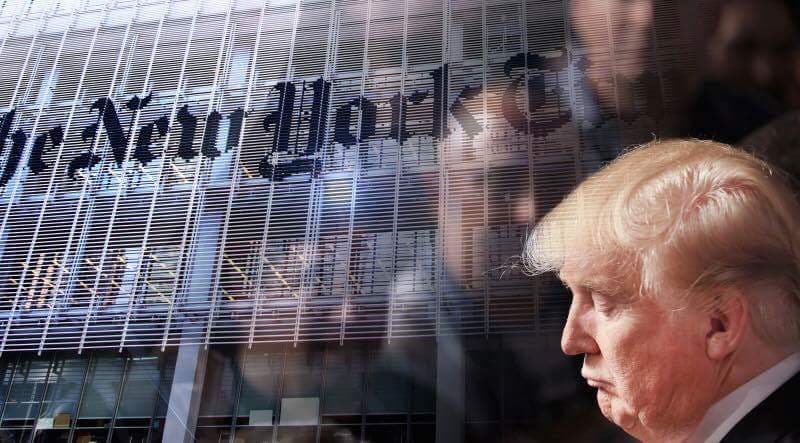 After spending over a year decrying the media as liars and frauds, President-elect Donald Trump went to the offices of The New York Times in an attempt to mend fences, but the staff there were not in the mood to buy any of Trump’s snake oil he was offering for sale.

Trump presented the meeting as an opportunity for a meeting of the minds between himself and the second most read newspaper in the United States, which offered comprehensive coverage of why the nation should not vote for him. An editorial columnist for the New York Times, Charles Blow, was not in any way impressed with Trump’s bloviating attempts at being magnanimous and described, “the slime factor was overwhelming.”

Known for his biting and terse style, Mr. Blow was not in the mood to mince words about Trump attempting to back off from his hostile election rhetoric:

You don’t get a pat on the back for ratcheting down from rabid after exploiting that very radicalism to your advantage. Unrepentant opportunism belies a staggering lack of character and caring that can’t simply be vanquished from memory. You did real harm to this country and many of its citizens, and I will never — never — forget that.

To his credit to protect his own sanity Blow proudly proclaims he was not at the meeting, but that he read the transcript which was an exercise in patience in itself. He says he has no interest in working with a Trump administration:

I will say proudly and happily that I was not present at this meeting. The very idea of sitting across the table from a demagogue who preyed on racial, ethnic and religious hostilities and treating him with decorum and social grace fills me with disgust, to the point of overflowing. Let me tell you here where I stand on your “I hope we can all get along” plea: Never.

During the meeting, Trump said he would not prosecute Hillary Clinton, that he was not going to use torture, and that he, in fact, does believe there is merit to the very real threat of climate change destroying the planet’s surface and making it unlivable.

Blow finds Trump’s admittance to these issues now, after he has been elected, to be unacceptable, “You are an aberration and abomination who is willing to do and say anything — no matter whom it aligns you with and whom it hurts — to satisfy your ambitions.” He went on to conclude, “You are a fraud and a charlatan. Yes, you will be president, but you will not get any breaks just because one branch of your forked tongue is silver.”

Putting the pieces of the nation back together after shattering them by spreading racism, fear, and the promise of violence is not going to be as simple as having a cheap meeting with a newspaper. Trump made it a point to say the New York Times was, “The Times is, it’s a great, great American jewel. A world jewel. And I hope we can all get along well.” There are millions of individuals around the nation who are not any further interested in Trump’s lies today than they were a year ago and those individuals, including Charles Blow, will not be moving to “get along” with Trump any time in the near future.