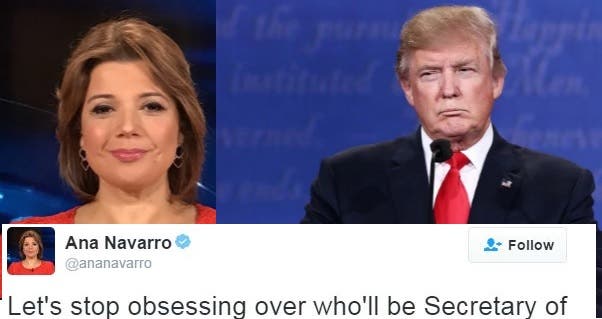 Trump Said He Wants To Keep A Plant In Indiana. Bernie’s Response Is Perfect

Now that the American people are sobering up to the fact that they actually elected Donald Trump as the 45th President of the United States, all eyes are falling towards him as he assembles his cabinet. Of particular interest to the nation is who he will select as the next Secretary of State. The buzz around the  Kool-Aid dispenser is that Trump is eyeing either former New York City mayor Rudy “9-11!” Guiliani or former Massachusettes governor Mitt “Binders Of Women” Romney to fill the role as America’s next top diplomat.

However, as one astute Republican political commentator observed, the nation doesn’t even need a Secretary of State if Trump is president – and her reason is both hilarious in its simplicity and terrifying that it may actually come true.

Trump’s recent Twitter tantrum about the state of affairs in Cuba drew some side glances after he threatened to “terminate the deal” if Cuba did not acquiesce to his demands. 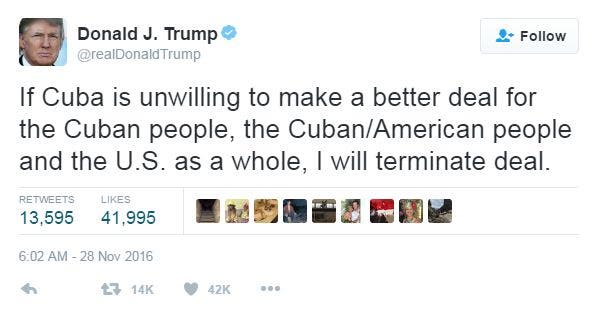 Trump’s simplistic remarks are in regards to a deal brokered by President Barack Obama in 2015 which restored diplomatic ties with Cuba after they had been severed since 1961. Previously travel was banned to Cuba, and American citizens were prohibited from doing business with any person or entity residing on the Communist island. Now, under Obama’s deal, embassies for the United States have opened on Cuban soil, and vice versa.

Travel restrictions have been eased, and commerce was allowed to begin under special circumstances. Visitors to Cuba are now permitted to bring back $400 worth of goods, with 25% maximum on alcohol or tobacco ah la the fabled Cuban cigars. However, Trump may have an issue with when the now deceased dictator Fidel Castro took power, as he annexed a billion dollars worth of U.S. wealth over 50 years ago. Trump’s communication director, Jason Miller, says Trump’s position is based on seeking “freedom in Cuba for the Cubans and a good deal for Americans where we aren’t played for fools.”

Ana Navarro, a Hispanic member of the “Never Trump” Republican brigade who begrudgingly voted for Hillary Clinton, took to Twitter to share her terse disgust with Trump by pointing out that Trump could handle every problem facing America via Twitter. He doesn’t need a cabinet at all with his radical version of streamlined governing: 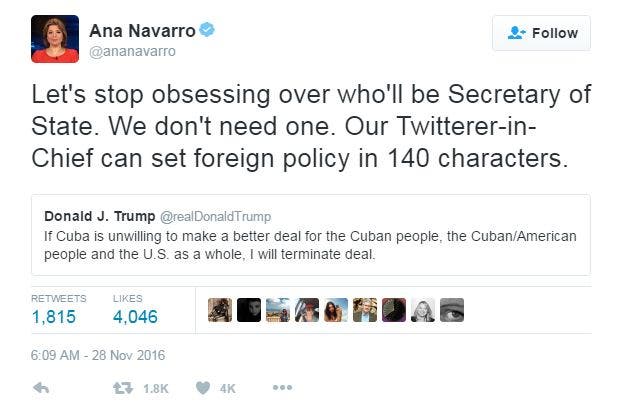 As amusing as Navarro’s comment is, it is also not too far from the truth either. Trump is soon to be the most influential man on the face of the planet, and rather than using the bully pulpit as his method of communication of choice he very well may use his Twitter account like a mace instead to smash and dismantle those who he finds displeasing. The behavior of Trump is an embarrassment to the entire nation, not only for his childishness but also for his lack of thoughtfulness. Whoever the president is, it is their duty to be the leader of every citizen, and not only those who voted for them. This is something Trump has not yet learned, and he may never learn, which is to the detriment of the entire nation’s citizenry.