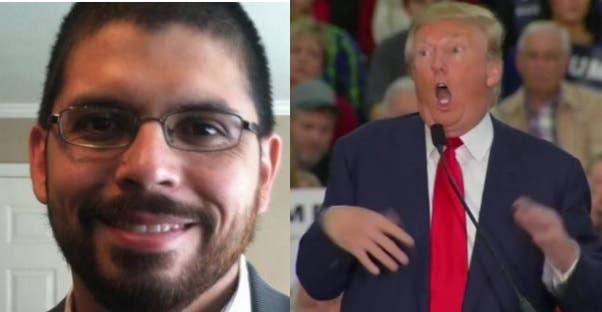 A Texan electoral college voter has just resigned his post in protest over the laws which obligate him to vote for Donald Trump. Art Sisneros announced his decision in a personal blog post entitled Conflicted Elector In A Corrupt College. In it, he details his displeasure with the way that democracy has been twisted; that his party has forced him to swear an oath to toe the party line and support a candidate that he cannot in good conscience support:

When asking the three wisest men I know about the wisest decision I should make, I received three different answers. As an Elector, I came to conclusion I have three options under our current system. I can 1) vote for the nominee of their party under which I was elected, 2) vote for someone else and be considered a faithless elector (a term I despise), or 3) I could resign my position if the candidate turns out to be someone I can not, in good conscience, vote for… If Trump is not qualified and my role, both morally and historically, as an elected official is to vote my conscience, then I can not and will not vote for Donald Trump for President. I believe voting for Trump would bring dishonor to God.

Sisneros details how he cannot vote for Trump because he does not believe that he is “biblically qualified” to be President. While his explanation for what this qualifer entails is extremely tedious and smacks of religious extremism, his basic conclusion is that he cannot vote for Donald Trump, as he is not a moral or just human being who cannot be trusted to uphold conservative values: “It seems clear to me that God both calls me to vote and directs me to only vote for men who fear Him and are just according to God’s law.”

We can all agree that Donald Trump is exceptionally unjust and his character is so outrageously immoral he could have been pulled right from the first tale of the Decameron. But Sisneros goes on to rightfully question the state of the electoral college as it exists today, denouncing it for putting him in the uncomfortable position where he must either vote against his conscience or become an oathbreaker:

“the Republican party of Texas declares their #1 principle is to honor God and original intent of the Constitution. They then force Electors to make a pledge that is contrary to both.  To point out this discrepancy is treasonous. One thing is clear, I have sinned in signing that pledge…The heart of this issue now is, does honoring the pledge cause me to sin?  If it does, then I am obligated not to honor it.[17]  If it doesn’t, then I am obligated to honor it.”

Sisneros cannot be the only elector who feels so torn. With luck, his departure will start a wave of defections that calls the purpose of the electoral college into question once and for all – and possibly even spare our nation the trauma and pain of a Trump presidency.