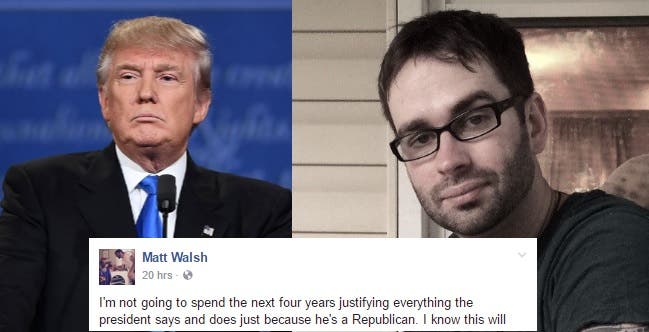 Donald Trump took to Twitter this weekend to complain about how he lost the popular vote, unable to come to terms with the fact that he successfully alienated a significant portion of the American people and is widely despised across the country.

In his efforts to explain away his enormous 2 million-plus deficit in the popular vote, Trump decided to undermine the legitimacy of his own election by giving credence to a racist conspiracy theory that originated with Alex “Chemtrails Are Turning The Frogs Gay” Jones.

There is absolutely no evidence that millions of illegal aliens voted in this election. There is substantial evidence, however, that millions of Americans were disenfranchised by Republican voter ID laws and that in at least one state, ballots were stuffed in favor of Trump.

Republican journalist Matt Walsh took to Facebook to break down exactly why this statement is so problematic, and what this kind of response from our “president-elect” entails for the future.

I’m not going to spend the next four years justifying everything the president says and does just because he’s a Republican. I know this will put me in a minority among conservatives, but I intend to hold Trump accountable same as I would any other politician.

On that note, let’s look at this tweet the President Elect sent out today. Two problems:

First, it’s an abject lie. There is no evidence that “millions” of votes were made illegally. The future president is making wild, conspiratorial claims without the slightest concern about whether those claims have any relation to the truth whatsoever. I imagine him employing this same tactic as president when it comes to matters of national security, where lives are at stake, and it gives me a very queasy feeling.

Second, the Clinton camp is trying to get a recount in several states. The man who WON has now JUSTIFIED those recounts by claiming that millions of votes were illegitimate. By his own words, a national recount of every vote must be conducted. That’s according to Trump himself. The guy who won. The guy who won just questioned the legitimacy of his own win.

And why? Because of his pride. Even though he won, he can’t stomach the idea that fewer people voted for him than Clinton. So, just to service his damned vanity, he undermined his own win and called into question the authenticity of a voting process that just resulted in him becoming president.

We are in for four years of this crap, folks. And I’m not going to play along. I refuse. Trump is wrong here. He’s lying. He’s being a prideful, reckless idiot and he deserves to be raked over the coals for it. And those who defend him on this deserve to be criticized right along with him.

Trump has already shown he is more than willing to casually lie about anything if it suits him, and his willingness to use conspiracy theories and fabricated stories to justify his actions is terrifying in a Commander-in-Chief. If he’s already using InfoWars as a source of political facts, how long will it be before we’re being told a special anti-Muslim police force is being set up to investigate all the underground Sharia courts in Texas or the secret Muslim Brotherhood (an Egyptian political party) camps in the Arizona desert?

Donald Trump’s supermassive ego is a threat to the United States as we know it. In one tweet, he has questioned the integrity of our electoral process and blown a racial whistle insinuating undocumented migrants attempted to interfere with the election, further increasing the paranoia and suspicion that his racist followers hold against non-whites. This kind of behavior is unpresidential and appalling on every conceivable level, but it seems the definitions of those words are going to be mightily tested in the next four years.