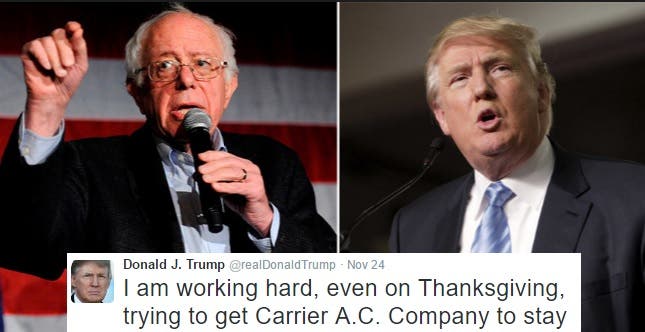 Jill Stein Just Filed For A Recount In Pennsylvania

Donald Trump made a bold claim over the Thanksgiving weekend, promising his Twitter followers that he was working tremendously hard to convince the Carrier A.C. company and its parent United Technologies to not outsource 2,100 jobs from Indiana to Mexico.

I am working hard, even on Thanksgiving, trying to get Carrier A.C. Company to stay in the U.S. (Indiana). MAKING PROGRESS – Will know soon!

Trump specifically promised the people of Indiana that he would convince the companies to keep the jobs within the United States, blaming the North Atlantic Free Trade Agreement (NAFTA) for the shipping of their jobs overseas. Unfortunately, there’s one simple reason for the move, as noted by the New York Times:

The two plants — a Carrier factory employing more than 1,400 workers in Indianapolis and a United Technologies plant with 700 employees in Huntington — are profitable, but pay workers $15 to $26 an hour — about what the company’s workers in Monterrey, Mexico, earn in a day. In a time of slow economic growth and intense pressure from Wall Street to improve profits, moving production south of the border seemed like too good of an opportunity for United Technologies’ executives to pass up.

Capitalism’s insatiable demand for endless growth is impossible to maintain and will one day reach a breaking point – with catastrophic consequences. In the meantime, workers like those at the Carrier/UT plants in Indiana will have to pay the price for the profits of the corporate oligarchs, losing their jobs at a profitable factory just so that the bigwigs can make a couple extra bucks. The workers themselves, once fired up by Trump’s recognition of their economic woes and instability, aren’t convinced in the real estate mogul’s promises.

Veteran factory worker Jennifer Shanklin-Hawkins told the New York Times that Trump’s announcement was “baloney.I could see him reaching out to Carrier, but I don’t think anything will happen. He can try and talk to them, and it’s good that he mentioned it, but I think Carrier will still leave.”

However, Trump wasn’t the only one who recognized how much damage that overseas outsourcing and corporate greed had done to the American manufacturing centers. Senator Bernie Sanders (I-VT) was enormously popular in Trump states for the same reason; he loudly and passionately decried the greed of Wall Street and the multinational corporations that shipped job overseas while reaping millions in profits.

Sanders just declared his intention to hold President Trump to his campaign promises by filing the Outsourcing Prevention Act, demanding that Trump hold United Technologies’ feet to the fire and keep good-paying American jobs in our country by threatening their precious defense contracts.:

“Let’s be clear: it is not good enough to save some of these jobs. We cannot rest until United Technologies signs a firm contract to keep all of these good-paying jobs in Indiana without slashing the salaries or benefits workers have earned.

United Technologies is not going broke. Last year, it made a profit of $7.6 billion and received over $6 billion in defense contracts.  It has also received more than $50 million in corporate welfare from the Export-Import Bank and very generous tax breaks.

In 2014, United Technologies gave its former CEO Louis Chenevert a golden parachute worth over $172 million. Last year, the company’s five highest paid executives made over $50 million. The firm also spent $12 billion to inflate its stock price instead of using that money to invest in new plants and workers.

I call on Mr. Trump to make it clear to the CEO of United Technologies that if his firm wants to receive another defense contract from the taxpayers of this country, it must not move these plants to Mexico.

We need to send a very loud and very clear message to corporate America: the era of outsourcing is over. Instead of offshoring jobs, the time has come for you to start bringing good-paying jobs back to the United States of America.

If United Technologies or any other company wants to keep outsourcing decent-paying American jobs, those companies must pay an outsourcing tax equal to the amount of money it expects to save by moving factories to Mexico or other low-wage countries. They must pay back all of the tax breaks and other corporate welfare they have received from the federal government. And they must not be allowed to reward their executives with stock options, bonuses or golden parachutes for outsourcing jobs to low wage countries.”

Forbes, the mouthpiece for the 1% and the monied elites, has already released a sanctimonious and dismissive article declaring this plan to be “entirely ludicrous,” shaming Bernie with an insufferable smugness for having the nerve to question the economic status quo and to not simply bask in the cruel and uncaring rays of the neoliberal sun.

Multinational corporations have exploited and disregarded the American people for too long – and it’s time to make them pay for it. It seems incredibly unlikely that a man like Trump, who made his fortune by exploiting, extorting, and outright theft, will have the guts to stand up the jackals of Wall Street and K Street. But a populist champion like Bernie Sanders may be able to publicly shame him into doing the right thing.