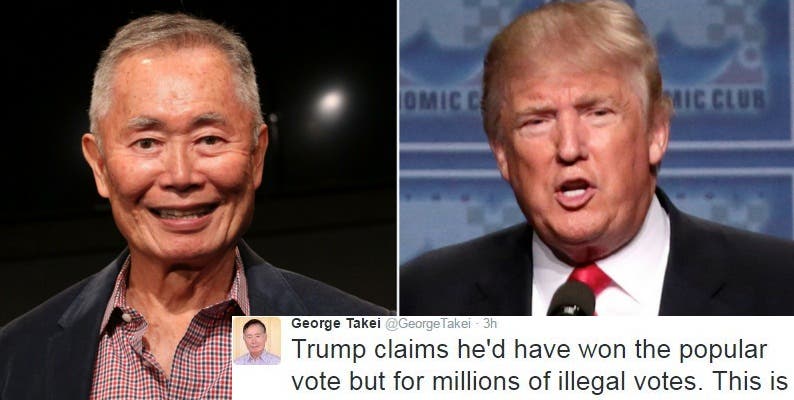 The hypocrisy of President-elect Donald Trump is on display for all to observe with his recent Twitter post where he claimed, without a shred of evidence, that he would have won the popular vote had it not been for “millions of people who voted illegally.” Trump has been on the offensive with Twitter tantrums after a recount in several states has begun due to various irregularities.

In Trump’s inability to refrain from embarrassing himself and the rest of the nation with his bizarre Twitter behavior that is not befitting the next leader of the free world he allowed his stupidity to open the door to a full election recount as was pointed out by American treasure George Takei who Tweeted:

The move by Trump is curious and exposes that he and his team are talking out of both sides of their faces. Just hours earlier Trump’s senior adviser, Kellyanne Conway, was a guest on CNN’s “State of the Union” where she stated Trump was being “gracious” by not moving to prosecute Clinton for her alleged misdeeds. Conway implied Trump’s graciousness, however, may end if Clinton continues to push for further recounts in other states. Conway said:

And so he said he wouldn’t rule it out. He said it’s just not his focus right now. I think he’s being quite magnanimous and at the same time he’s not undercutting at all the authority and the autonomy of the Department of Justice, of the FBI, of the House Committees, who knows where the evidence may lead if, in fact, it were — if the investigation were re-opened somewhere.

But this is the president-elect’s position right now and I would say he has been incredibly gracious and magnanimous to Secretary Clinton at a time when for whatever reason her folks are saying they will join in a recount to try to somehow undo the 70 plus electoral votes that he beat her by.

As Trump stated on numerous occasions, the United States is a nation of laws. If he truly believes “millions” of individuals voted illegally, he should be open to a full audit of the election results and through his own big mouth he just opened the door to that very scenario transpiring.