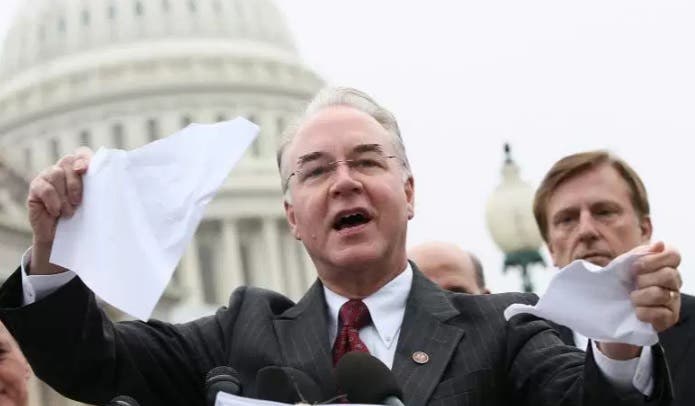 In a shamefully long history of Republican men controlling women through their bodies, today marks the beginning of another unfortunate chapter. President-elect Donald Trump has named Tom Price, formerly the Chair of the House Budget Committee, as the Head of the Health and Human Services Department. Trump decided to appoint someone with no health experience—or even connection to real health from a science perspective—instead deciding to choose a man who has spent his career concerned with inventing budget concerns to cut money out of the social safety net.

Price’s background will likely set us back decades in health—today marks the first day of what will be a long four years. As a Republican from Georgia (this description speaks for itself), Price’s policy on women’s health becomes immediately clear. He is against women’s right to an abortion. He is against the Affordable Care Act. Specifically, he is outraged by the intersection of the two hugely necessary protections and as such, is leading the charge against the ACA’s mandate on birth control, which guarantees its affordability.

This man who has never taken birth control and has no idea what it’s like to deal with female reproductive health has made it his mission to make life difficult for women who need birth control. In 2012, Price was confronted with how are women supposed to pay for birth control if they can’t afford it? Price denied that this was even a possibility and went into a maniacal tirade in which he attempted to create a nonsensical relationship between birth control and the First Amendment.

The interaction between Think Progress’ Scott Keyes and Price lasted only about 30 seconds:

“One of the main sticking points is whether or not contraceptive coverage is going to be covered under health insurance plans and at hospitals and whether they’re going to be able to pay for it, especially low-income women … where do we leave these women if this rule is rescinded?””

Price’s reply is sickening: “Bring me one woman who has been left behind. Bring me one. There’s not one. The fact of the matter is this is a trampling on religious freedom and religious liberty in this country.”

A survey commissioned by Planned Parenthood Action Fund in 2010, before the mandate, found that a third of American women struggled with the cost of birth control and that to avoid these costs would often be forced to forgo birth control altogether. This is true for Lucille, a 26-year-old woman who told her story to Good Magazine, saying “Right after college when I got kicked off my parents’ insurance, I couldn’t afford it and had to stop taking it. As a result, I had a few unnecessary ‘scares’ that wouldn’t have been scares’ at all if I had the pill.”

This has nothing to do with the First Amendment, which Price is using to promote the strawman argument that the availability of low priced contraception somehow detracts from another person’s freedom to follow their religious beliefs and not use birth control. Someone needs to tell Price he has this thing all wrong—it’s the other way around. His backward views on religion, in fact, violates the reproductive freedom of millions of women.

Countless women came forward in reaction to Price’s hurtful statement, dispelling the fact that they even exist and made light of the socioeconomic struggles that American women – especially minority women. Women posted common stories of not being able to afford birth control before Obama, and wrote about how that had a huge impact on their lives. No religious fundamentalists wrote in about how these women taking birth control took away from their religion, however.

The ability to access birth control and other forms of contraception directly contributes to a decreased rate of teen pregnancy, which Price didn’t take bother to take into consideration as he was complaining about how the Obamacare mandate infringes  his ability to dictate to women what they should do with their bodies. No, the only thing on Price’s mind is literally the price. He does not want the government subsidizing personal choices that he doesn’t approve of, which makes him a terrifying choice for a health policy position.