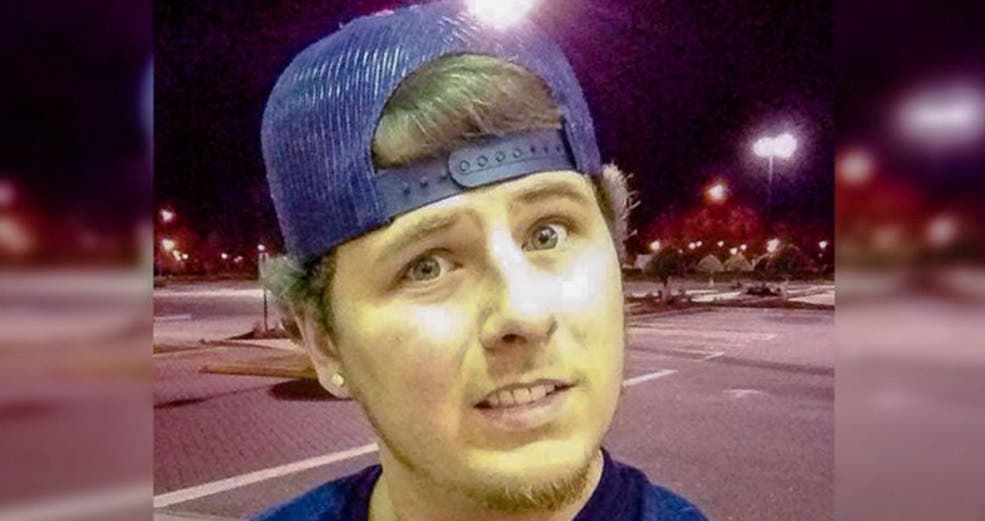 A white man from Gainesville, Florida, brutally attacked a Hispanic man for no reason in the name of Donald Trump on Nov 10th.

The attacker, Caleb Joseph Illig, assaulted Pablo Echevarria in the parking lot of the Gate Food Post store, repeatedly punching him in the back of the head and neck. Security footage confirms witness accounts of the incident, which took place at 1:10am. Bystanders heard Illig shout at Echevarria, “Let’s Trump down,” in the throes of the beating.

Echevarria was totally thrown off by the attack from the total stranger and asked Illig why he was punching him. Illig’s response perfectly sums up the empowerment racists feel now that their candidate holds office, saying, “This is for Donald Trump.”

Instead of fighting hate with hate, Echevarria employed “evasive movements,” according to the police report obtained by Egberto Willies. An employee stepped in and Illig skirted off. Echevarria described pain following the attack but it is unclear whether he went to a hospital or received any medical attention.

It has been confirmed by police that Illig was the perpetrator. According to officers, the footage “clearly shows [Illig] striking [Echevarria] in the back of the head, and completely corroborates the [victim] and [witness’] accounts of the incident.”

Illig has claimed drunkenness and bipolar disorder to justify his hate crime, also telling police, he had “no recollection of the incident whatsoever.” Unfortunately, Illig has not been charged with a hate crime and instead is being tried for battery.

Ben Tobias, a Gainesville police officer spoke out about the incident, indicating this is not the first time he’s seen this type of racially motivated belligerence since Trump has been elected.

“Just looking at election results, the community is divided almost 50/50,” he explained. “It’s not just here in Gainesville. I’d like to think we’re doing better, but we’re having our own problems crop up. It’s easy to say, but folks can’t just go around being scared to be a victim of a crime. If they think they’re being targeted, definitely contact us.”

This applies across the nation, in this tense climate where those who voted for hate feel validated. Trump has given these people a voice and they are using that voice to attack anyone who looks different than they do. The worst part of this is that instead of feeling ashamed for their xenophobia, they feel justified and proud.

The election of Donald Trump has correlated to unprecedented levels of hate crimes –900 have been documented in the first 10 days since the election. And these are just the documented instances, never mind what we haven’t heard about—the off-hand remarks and hateful gestures that are now out in the open. It truly feels like us vs. them, and we have to fight back where it matters — in government.