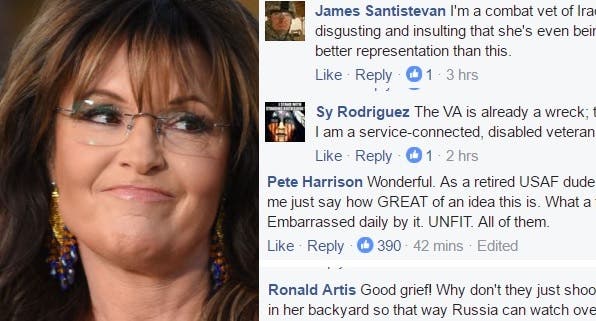 Veterans from all branches of the military are reacting with abject horror to the news that former Alaska governor and Tea Party matriarch Sarah Palin could be chosen to lead the Veteran’s Affairs department.

Citing her lack of military service and general dearth of qualifications, veterans took to social media to express their displeasure with Trump’s potential choice.

Sarah Palin is a supremely terrible pick for the Veterans Affairs Secretary. Being the furthest thing you could be from either a veteran or a doctor, she would be in charge of an intricate healthcare system in desperate need of reform and 300,000 employees. The VA also deals with finding jobs and housing veterans, tackling homelessness among vets, and a host of other desperate issues that afflict the brave men and women who serve the United States abroad.

Listen to the vets, Mr. Trump. Sarah Palin would be an unmitigated disaster in any capacity, but putting her in charge of our veterans’ affairs would be a huge insult to grevious injury. If Sarah Palin gets the job to head the VA, us Veterans are Fucked! She can't even run water!

Sarah Palin over the VA just let's me know Trump gives two fucks about veterans. Like the many times he disrespected us during his campaign

@realDonaldTrump veterans have been treated badly way to long we need someone who knows what their doing. Sarah Palin is a joke. No offense