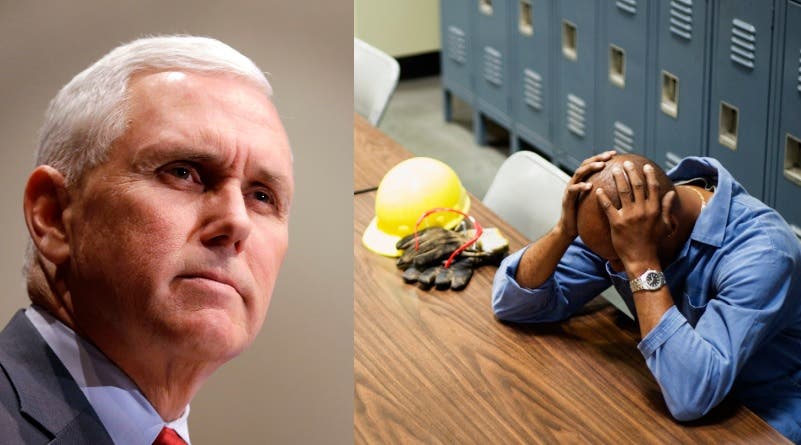 Donald Trump just flew to Ohio to do a victory lap for paying millions to Carrier so they would only outsource 1,300 jobs, but research shows that this isn’t even the first time his running mate Mike Pence has used the Indiana Governor’s office to pay companies for sending jobs overseas. Even worse, the Republican President-elect’s deal – signed by lame duck Indiana Governor & VP-elect Mike Pence – will fork over $7,000,000 in tax money to save 800 jobs, when Carrier had already obtained $500,000 in state tax dollars to keep those very same jobs over two prior negotiations.

If paying twelve times the amount last offered in a three-part negotiation is somehow considered winning said negotiations, then I think we will all have to adjust our definitions of winning to mean losing horrendously – just like Trump has done with his bankrupt companies for decades. Just a reminder, this is NOT what Donald Trump promised on the campaign trail, which was purportedly a 35% tariff on Carrier’s outsourced products, even though they’re sending 1,300 jobs overseas. The Indy Star reports:

During an Indianapolis rally in April, for example, Trump said he would “tax the hell” out of companies like Carrier. “You’re looking at a situation where the jobs are being ripped out of our states, out of our country, like candy from a baby,” he said, later adding, “You’re going to bring it across the border, and we’re going to charge you a 35-percent tax.”

But all of that changed in February, when the companies announced they were shifting production to Monterrey, Mexico, and laying off 2,100 workers. A video of management announcing the layoffs at the plant went viral and Carrier quickly became a punching bag for Trump and other presidential candidates on the campaign trail. At Pence’s urging, the company later refunded $380,000 in grants in April and revoked the remaining, still unpaid amount.

Public records show that in 2007 before Pence took office, Carrier’s parent United Technologies received $140,000 in tax money to train workers under the same program. Then in 2013 under the Pence administration, Carrier directly received another $197,000 in tax dollars under the same program. Pence then awarded an additional $300,000 in state incentives awarded to United Technologies just last year, but they decided to outsource those jobs instead and didn’t collect.

In the cases of General Motors and plastics company PendaForm, both corporations got paid handsomely by Indiana’s IEDC after outsourcing jobs, in a program whose major loophole is that it is site-specific. That’s because corporations can rob the state’s coffers simply by making threats to move employees from one location, collect their blackmail fee and then move employees from yet another site to create profits for shareholders with a net job loss through outsourcing.

Plastics company PendaForm shut down a plant in Pekin in late 2013 and shifted the work to a factory in Mexico, costing about 37 workers their jobs, according to filings with the U.S. Department of Labor. The following year, the IEDC awarded the company $160,000 in tax credits to invest $4.9 million, retain 58 employees and add 42 employees to manufacture truck bed liners at its Bluffton plant.

The state has also awarded millions of dollars in incentives to General Motors since Pence took office, mostly to expand operations at its Bedford Powertrain and Fort Wayne Assembly plants. The automaker has received $4.6 million in incentives with promises to add 366 new jobs. At the same time, GM and one of its subsidiaries slashed 70 jobs at facilities in Kokomo and Marion as production was shifted to foreign countries.

There you have it. Republicans are happy to fork over tax dollars to their corporate friends if they’re in office, while decrying any attempts by the Democratic party to initiate direct spending on America’s crumbling infrastructure that would benefit all people equally – and provide good paying jobs. Trump’s actions are bound to inflame the corporate sector’s demands in a game of outsourcing blackmail that will not soon abate.

Government interference in the private sector flies in the face of Republicans vaunted free market capitalism, but squares deeply with the party’s roots in blatant hypocrisy and insider sweetheart deals to make the rich richer and to screw over American workers with PR shams and breadcrumbs.