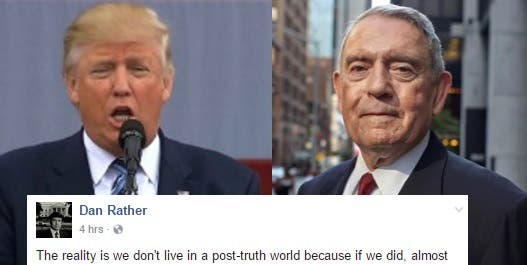 Conservatives Are Losing Their Minds Over This Mall Santa. Their Reason Is Disgusting

It’s clear that we are now living in a post-truth world, where the truth is malleable and exists only as it conforms to the beholder’s personal beliefs. As a Trump surrogate told CNN the other day, “there’s no such thing anymore as facts.” Which isn’t quite true; facts still exist, it is merely the confidence with which they are accepted that has been tarnished. Distorting the truth and delegitimizing everything creates an intellectual space where it is easy for truly pernicious falsehoods to become reality.

Donald Trump’s entire campaign was propelled by a rejection of facts and aided by a television news media that had the nerve to treat his ridiculous pronouncement and outrageous lies as merely another side of the argument that deserved the same amount of consideration as the truth, which was often discarded in their relentless pursuit of ratings. On social media, trenches were dug and echo chambers built long before the election, creating a self-sustaining space where partisan narratives were constructed and perpetuated without too much consideration for objectivity. All of that combined together to produce a tide of fact-rejection that allowed Donald Trump to sell his snake oil to a slim majority of the American people – but it was enough to get him into the White House.

Legendary journalist Dan Rather took to Facebook today to address the issue with his customary eloquence and thoughtfulness.

The reality is we don’t live in a post-truth world because if we did, almost every aspect of modern society would cease to exist – immediately. So the fact that we seem to be heading into that world in politics is not only deeply troubling, it has the potential to upend life as we know it.

A few days ago CNN commentator Scottie Nell Hughes, a Donald Trump surrogate, went on the Diane Rehm Show on NPR and in a panel discussion said of the fact that the President-elect regularly lies “I hear half the media saying that these are lies. But on the other half, there are many people that go, ‘No, it’s true.’ And so one thing that has been interesting this entire campaign season to watch, is that often when people that say facts are facts—they’re not really facts. Everybody has a way—it’s kind of like looking at ratings, or looking at a glass of half-full water. Everybody has a way of interpreting them to be the truth, or not truth. There’s no such thing, unfortunately, anymore as facts.”

This isn’t just one surrogate talking. This has been the entire thrust behind the Trump campaign and the duplicitous media outlets that have echoed the lies without question.

If people want to live in a post-truth world, where “elite” experts are all biased and facts are up for interpretation, I suggest they go all the way.

You can go to a post-truth doctor who could say “well the elitist scientific tests say you have strep throat but I say it’s cancer so let’s give you some chemotherapy.”

Or you can go to a post-truth electrician who might say “well those elitist electrical manuals published in New York and those government regulations out of Washington say you should ground your electricity, but that’s just a bunch of red tape.”

Or you can go to a post-truth auto mechanic who might say “well those elitist laws of physics say that this is how a braking system works, but let’s replace your brake pads with fresh-baked chocolate chip cookies because they will smell better when you hit the brake pedal.”

The reality is that all of modern society, from the way your cell phone hooks up to your wi-fi, to the way the rain funnels into the storm drain, to the way your freezer keeps your ice cream frozen, is based on facts. It’s because smart people, who went to school and learned facts, collaborated to figure things out. And they wrote them down so that other people would know those facts and be able to build on them. That’s how science works. That’s how technology works. That’s how modernity works.

Now that’s not to say that there aren’t things we don’t understand, or things we have gotten wrong. But that’s the great thing about facts and data. When they disprove something you thought, you can’t – or at least shouldn’t – ignore it. Once again, that’s how progress happens.

The United States has risen to the most powerful and prosperous nation in human history based on facts, an educational system that taught them, a legal system that respected them, and a political system that made it all possible. That is the winning formula for the health and security of our nation, and the world. And if you don’t like facts then I hope you don’t ruin everything for those of us who do.