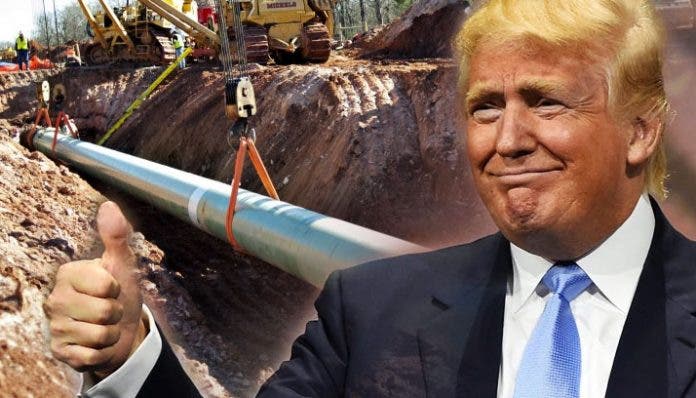 While many are cheering the Army Corps of Engineers’s decision to refuse an easement to Energy Transfer Partners and halt the construction of the Dakota Access Pipeline, it would appear the battle is far from over.

The blinding arrogance of American fossil fuel corporations was on full display as the Energy Transfer Partners issued a defiant statement to the government declaring their intention to continue the pipeline as planned and lambasting the Obama administration for what they saw as a “political decision.”

Energy Transfer Partners, L.P. (NYSE: ETP) and Sunoco Logistics Partners L.P. (NYSE: SXL) announced that the Administration’s statement today that it would not at this time issue an “easement” to Dakota Access Pipeline is a purely political action – which the Administration concedes when it states it has made a “policy decision” – Washington code for a political decision. This is nothing new from this Administration, since over the last four months the Administration has demonstrated by its action and inaction that it intended to delay a decision in this matter until President Obama is out of office.

The White House’s directive today to the Corps for further delay is just the latest in a series of overt and transparent political actions by an administration which has abandoned the rule of law in favor of currying favor with a narrow and extreme political constituency.

As stated all along, ETP and SXL are fully committed to ensuring that this vital project is brought to completion and fully expect to complete construction of the pipeline without any additional rerouting in and around Lake Oahe. Nothing this Administration has done today changes that in any way.

Indian Country Today‘s Ruth Hopkins asserts that the company believes the “language used by Army Corps Of Engineers makes their statement purely political and not legally binding” and warns that they are more than likely willing to begin illegally drilling, based on their past behavior.

For those who think ETP won't break the law, they sicced unlicensed vicious dogs on us & bulldozed burial sites & didn't report it

The remote location of the pipeline, the incoming president’s stated support for the Dakota Access Pipeline, and the general disregard shown to our treaties with Native Americans are heavy indicators that they may just start digging anyway. The company previously took advantage of Labor Day holiday weekend to begin bulldozing sacred burial sites, a week before a judge was set to hand down a decision on whether or not they could legally do so.

The power of public activism will soon be put to a brutal test. If Donald Trump ends up ascending the presidency, it will be open season not just on Indian tribal lands but on all our national parks and protected nature reserves. Trump is a caricature of a greedy capitalist who has never shown any remorse for the thousands of people he’s exploited and extorted to make his fortune. He has already declared his support for the Dakota Access Pipeline – which he has invested in – and he will certainly shrug his shoulders and go back to tweeting about pop culture while fossil fuel corporations despoil the lands we set aside for the victims of American genocide.

Native Americans have suffered for far too long at the hands of multinational corporations behaving like colonial overlords and by a federal government that treats them as second-class citizens. The protests at the Dakota Access Pipeline are an inspiring demonstration of what the unified power of the American people can accomplish, but it’s a power we’re going to need to wield often over the next four years. The real war is only just beginning.