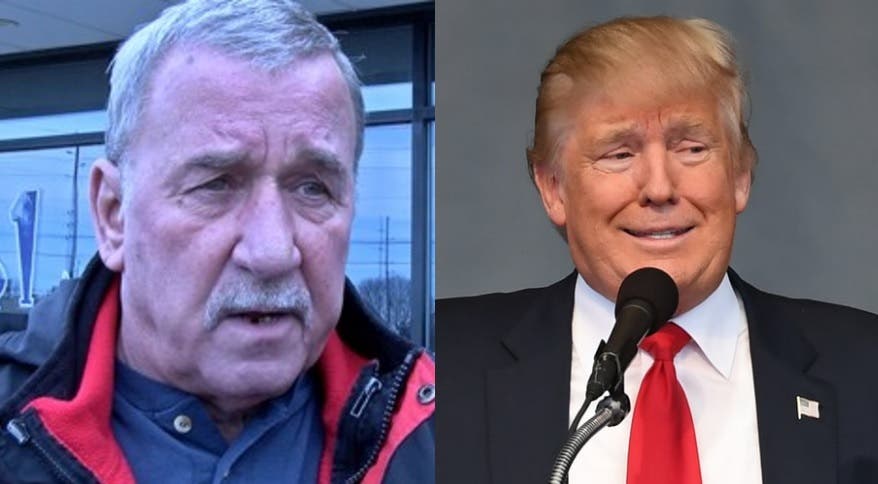 Trump has been working overtime to distort the facts of his “deal” with United Technologies and Carrier A.C. Our potential president and running mate Mike Pence gave $7 million in tax breaks to Carrier in exchange for the air conditioning company to move 1,300 jobs to Mexico instead of 2,100 jobs.

Carrier AC announced they will be raising prices by 5% to shunt some of the profit loss back on to the consumer and United Technologies CEO Greg Hayes recently admitted that many of the “saved” jobs will disappear anyway due to automation in the near future.

Which may be why the union leader of United Steelworkers 1999 is displeased with the deceitful Don. “He got up there [in front of a crowd of Carrier workers] and, for whatever reason, lied his ass off” said Chuck Jones to the Washington Post. “Trump and Pence, they pulled a dog and pony show on the numbers. I almost threw up in my mouth.”

Trump, unsurprisingly, inflated the number of jobs saved and distorted the truth to make himself look like a populist hero when in reality he was bending over backward for the giant corporation.

Of the nearly 1,400 workers at the Indianapolis plant, however, 350 in research and development were never scheduled to leave, Jones said. Another 80 jobs, which Trump appeared to include in his figure, were non-union clerical and supervisory positions. (A Carrier spokesperson confirmed the numbers.) And now the president-elect was applauding the company and giving it millions of dollars in tax breaks, even as hundreds of Indianapolis workers prepared to be laid off.

While it certainly is a relief for the 730 or so workers who won’t lose their jobs, hundreds more will go without – and now every corporation in America knows all they have to do is threaten to outsource to get a big payday from Trump.

We cannot allow him to turn this “deal” into some kind of evidence that he truly cares about the American people.

If Trump truly wanted to help the working class, he wouldn’t be staffing his cabinet with Goldman Sachs billionaires.

If he truly wanted to protect the livelihoods of American workers, he wouldn’t be considering a fast-food CEO whose first priority is to kill President Obama’s overtime rules as Labor Secretary.

If he truly was concerned for American manufacturing jobs, he wouldn’t be demanding that the government cancel a huge contract with one of the nation’s largest manufacturing employers just because the company’s CEO expressed some reasonable concerns about Trump’s volatility and incompetence.