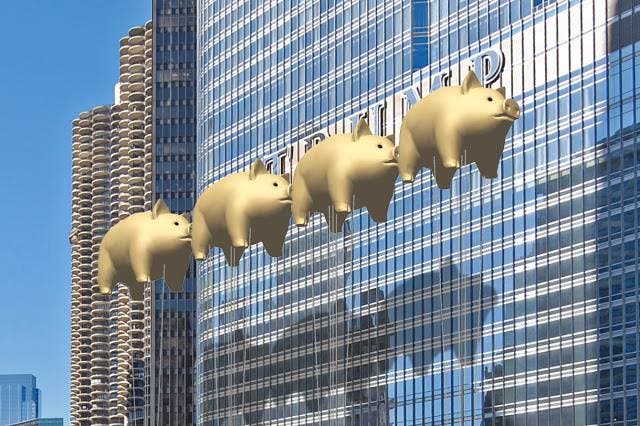 A Chicago architect’s plan to use land in the public right of way to provide “visual relief” to downtown residents facing twenty-foot tall TRUMP branding is gaining steam. Chicago’s leaders have decried the Tower’s tasteless signage for years now, pre-dating the Republican’s divisive presidential campaign. “Donald J. Trump putting his name on his building is extremely tasteless, but typical of him,” said 1st Ward Ald. Joe Moreno in 2014 to DNA Info.

The Architect’s plan would place four massive golden pigs into the glazing space of the signs as both a visual improvement and a poignant commentary on Trump’s frequent exhortations of the value of authoritarianism:

Jeffrey Roberts at Chicago-based New World Design Ltd. said the pigs pay homage to Pink Floyd’s “Animals” album, which, like George Orwell’s Animal Farm, depicts pigs as the rulers of society. The piece has four pigs — one for each year of a Trump presidency — and are painted gold “in a commentary of the gaudy style of Mr. Trump’s own gold-ensconced penthouse interior he has labeled ‘comfortable modernism,'” Roberts wrote.

In a blog post, Roberts went much further than that in explaining his “rational design,” which is filled with thought-provoking symbolism:

• Inflatable pigs – The giant inflatable pigs are an homage to Pink Floyd’s Animals album. We encourage our readers to listen and make their own interpretations. Animals is a masterpiece.

• Gold colored pigs – A commentary on the gaudy style of Mr. Trump’s own gold ensconced penthouse interior he has labeled “comfortable modernism.”

• Number of pigs – There is one pig for each of the four years the world will be forced to endure the Trump presidency.

• Direction of the pigs – The pigs are flying eastward toward Washington, D.C.

George Orwell wrote in his novel Animal Farm that, “If liberty means anything at all it means the right to tell people what they do not want to hear.”

People are frequently “flipping off” the Tower and posting it to Instagram, which is rapidly becoming its own art form.

Adding golden pigs to the visual space in front of the Tower would allow residents and visitors to more effectively express political criticism of the Republican demagogue, then they already are today.

Last month, Chicago voted to remove the honorary street signs given to a Trump Hotel which has been blighting their downtown district but they were considered a low priority for removal, until now. Today, Chicago removed Trump’s free signage, in the wake of the President-elect’s declaration to cancel a contract with Illinois-based Boeing for the new Air Force One planes over minor criticism from its CEO.

Residents can only hope that their wise city council implements the plan to immediately to provide visual relief for Chicago’s residents from the tasteless blight caused by the leading brand in American bigotry being so prominently displayed in their downtown area.

To date, no formal plans for the golden pigs have been submitted.