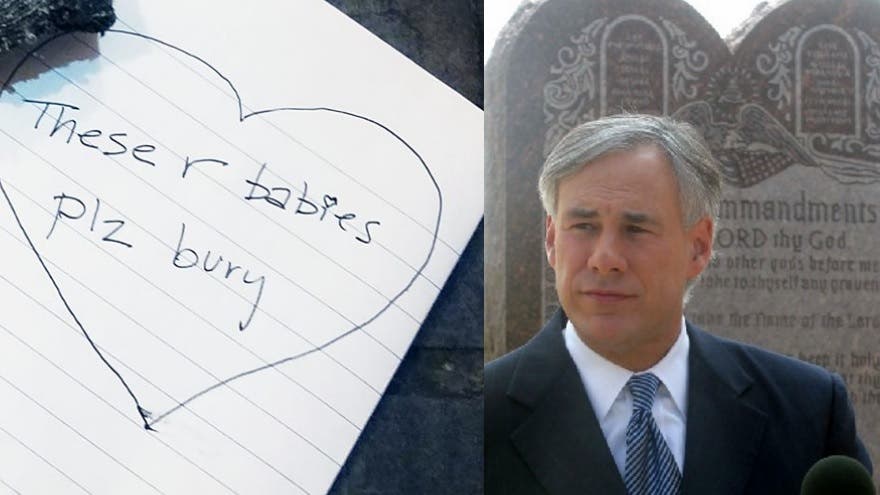 The Republica war on women is showing no signs of abating. Texan women have long suffered under the punishing control of Christian religious extremists who not only seek to curb their constitutionally-protected right to an abortion but to humiliate and punish them in the process.

The most recent development is Texas’ crackpot Governor Greg Abbot’s signing of a bill requiring abortion clinics to bury or cremate the remains of aborted fetuses, an unnecessary financial burden that would increase the cost of having an abortion and is nothing but an obvious attempt to shame and traumatize those who do make the difficult decision to end a pregnancy.

VICE Broadly’s Callie Buesman did some investigating and found some serious issues with the law’s implementation:

Several reproductive rights organizations I’ve spoken to since the rule was first proposed have told me that no one is really sure how they’d even be implemented: Will providers have to enter into relations with funeral homes? How will they shoulder the additional expense of burial and cremation services (which could cost around $2000, according to an estimate from director of the Funeral Consumers Alliance of Texas)? How does one even bury or cremate an embryo that’s only a few inches in length? Despite the ambiguities in the rules, providers who cannot comply with it may have to shut their doors, and those that are able to remain open fear that the additional costs will be passed onto their patients, making safe and legal abortion a financial impossibility for low-income women.

Governor Abbott says it is giving a “giving voice to the unborn.” Since they are so obsessed with treating “life” with the proper respect in a state that alone accounts for one-third of all United States executions since 1976, a woman named Jex Blackmore has started a project called “Cumrags for Congress.”

While that may sound gross, Blackmore says that’s the point: “It’s crass, humiliating, disgusting, a waste of resources, and absurd, just like this regulation.” Speaking to VICE’s Broadly, she details that:

“The concept of the state mandating a non-medical ritual as part of the abortion procedure is offensive and crude, essentially demanding that all citizens adopt the moral, philosophical opinion that fetal tissue is comparable to a living human. Fetal tissue has the ‘potential’ to become a human, but is not a human yet, does not have consciousness, and cannot exist without the mother host.” She points out that semen and ova have the potential to become human life, yet “we do not mourn every ejaculation.”

While the burial law may seem relatively benign, recognize that’s just because the heavy anti-abortion push by the American Taliban was shut down by the Supreme Court last year. Last year, Senate “trap law” bill HB 2 closed all but six abortion clinics in the entire state, prompting hundreds of thousands of women to journey to Mexico in search of back-room and extremely dangerous illegal abortions or forcing them to self-induce their own abortions with methods like inserting knitting needles or coat hangers into the vagina and uterus, douching with solutions such as caustic lye, or swallowing drugs or chemicals, which can lead to injuries, cases of permanent infertility, and deaths.

That is what patriarchal Christian extremism produces – and women are always the ones forced to suffer. Now Abbott and the rest of the rich old white men that run the Texas legislature are attempting to tell women what they can and cannot do with the products of their own bodies – so you should share some of yours with them.

If you’d like to make a statement, you may share your expressions of personal pleasure or the results of menstruation with the governor of Texas at:

I must warn you that the legality of mailing semen is rather unclear, but feel free to get creative.

If he’s truly so concerned with treating bodily tissues with the unrealized potential for life, he won’t mind.