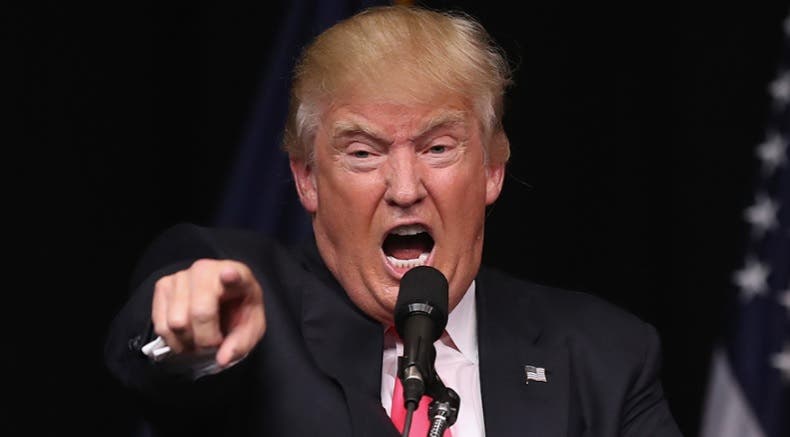 A female college student who has suffered a year of brutal abuse from Donald Trump’s deplorable troll army after the candidate tweeted about her has finally told her story to reporters. The young woman, Lauren Batchelder, was 18 years old and a freshman at Saint Anselm College in Manchester, NH when she confronted Donald Trump at a campaign event last October. “So, maybe I’m wrong, maybe you can prove me wrong,” Batchelder said to the candidate, “but I don’t think you’re a friend to women.” The morning after her question the pompous insecure middle schooler of a man that is Donald Trump felt compelled to take to Twitter and attack the young woman for raising concerns that have subsequently proven to be more valid than she could ever have imagined.

Trump, exercising his penchant for punching down on behind the safety of his keyboard, called Batchelder an “arrogant young woman who questioned me in such a nasty fashion” and accused her of being a “plant” of Jeb Bush, whose campaign she had volunteered for in order to gain more familiarity with the Republican platform. In addition to the gratuitous insults, Trump appeared to directly encourage his fans to harass Batchelder by tweeting screenshots of her social media accounts. Sure enough, almost as soon as the tweets went out, Trump’s legions of mother’s-basement-based online brown shirts, who have no better outlet for their sexual frustration than demeaning and harassing women, had pounced.

Batchelder received dozens upon dozens of threatening and often sexual messages and calls, making her life a living hell. And the remarkable devotion of Trump’s groveling devotees has meant that the abuse has not let up even as more than a year has passed. Just a few days before the election, she received this message, of the kind she endures many of every day: “Wishing I could fucking punch you in the face. I’d then proceed to stomp your head on the curb and urinate in your bloodied mouth and I know where you live, so watch your fucking back.” An edited photo of her face covered in semen has become popular in the online cesspools inhabited by Trump’s alt-right worshippers.

Trump’s tweets, despite the obnoxious character they reveal, are not particularly dangerous in and of themselves, but his hordes of angry followers ready to execute his every command create a serious threat. Indeed Batchelder said that the “scariest part” of her whole affair has been that she “didn’t really know what his supporters were going to do.” And she is far from the only person whose life has been upended by Trump’s twitter obsession. Most recently, Chuck Jones, the union leader who bravely exposed Trump’s shameful lies regarding the Carrier deal, has seen his life and those of his children constantly threatened by the brown shirts after Trump attacked him in 140 characters.

The fact that Trump has shown absolutely no concern for effects his inciteful tweets have on their victims and has continued to encourage his followers to abuse women and opponent online makes him just as guilty. And as his Twitter following continues to grow and he inherits issues of national diplomacy – which he has already demonstrated himself farcically unable to handle – the danger his impetuous tweets pose will only grow.