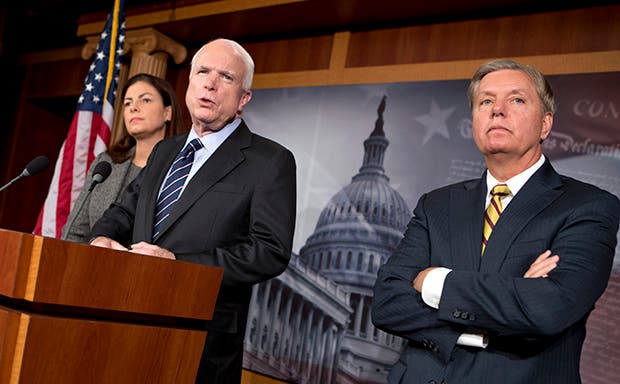 A group of prominent Democratic and Republican senators has released a statement calling for a bipartisan investigation into cyberattacks against the United States by foreign governments. The move comes on the heels of revelations that Russian government hackers directly interfered in our presidential election in order to propel Donald Trump to the presidency. John McCain (R-AZ) and Lindsey Graham (R-SC), two Republican senators recognized as authorities on foreign policy, joined Chuck Schumer (D-NY) and Jack Reed (D-RI) in issuing the statement:

For years, foreign adversaries have directed cyberattacks at America’s physical, economic, and military infrastructure, while stealing our intellectual property. Now our democratic institutions have been targeted. Recent reports of Russian interference in our election should alarm every American.

“Congress’s national security committees have worked diligently to address the complex challenge of cybersecurity, but recent events show that more must be done.  While protecting classified material, we have an obligation to inform the public about recent cyberattacks that have cut to the heart of our free society. Democrats and Republicans must work together, and across the jurisdictional lines of the Congress, to examine these recent incidents thoroughly and devise comprehensive solutions to deter and defend against further cyberattacks.

“This cannot become a partisan issue. The stakes are too high for our country. We are committed to working in this bipartisan manner, and we will seek to unify our colleagues around the goal of investigating and stopping the grave threats that cyberattacks conducted by foreign governments pose to our national security.

While Donald Trump and his Republican apologists have continued to deny the fact that the Kremlin interfered in our election on his behalf, the senators letter provided a powerful call to action to defend the sanctity of our nation and our democracy from malicious foreign influence regardless of petty political feuds. “This cannot become a partisan issue” their statement said, “The stakes are too high for our country. We are committed to working in this bipartisan manner, and we will seek to unify our colleagues around the goal of investigating and stopping the grave threats that cyberattacks conducted by foreign governments pose to our national security.”

As the evidence mounts not only that Russia tampered with our democratic process but that Trump’s campaign may have collaborated with the Kremlin in doing so and that prominent Republicans covered up the hacking, an investigation into Trump and the Russian hackers is looking increasingly likely. What those investigations could turn up are the extensive financial ties between Trump’s campaign and Russian oligarchs, secret meetings in Moscow where the Trump campaign coordinated with the Kremlin, and a possible secret back-channel between Trump himself and his pals in Moscow.

Every American should be gravely concerned at the potential threat to our democracy posed by a man beholden to a hostile and despotic foreign power that guided him to the presidency by subverting our democratic institutions. Recent rumors that Trump is likely to select Exxon CEO Rex Tillerson, who has extensive investments in Russia and is a personal friend of dictator Vladimir Putin, as secretary of state have only heightened concerns that Moscow will have a hand in running the international affairs of the Trump administration, an unprecedented intrusion of foreign influence on the democracy Trump claims to cherish. We can only hope that the Senate and the American people heed the call of these brave Senators and take all necessary steps to uncover the truth and prevent a Kremlin lackey from assuming the presidency.