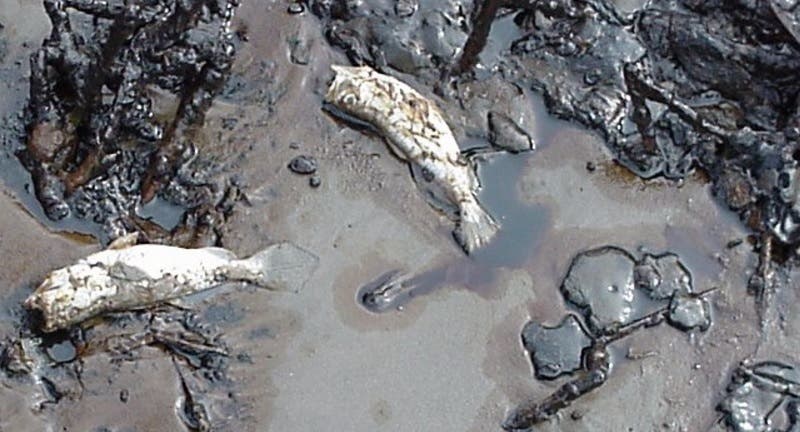 A major pipeline spill has just occurred in North Dakota, where a rupture in the Belle Fourche Pipeline leaked 176,000 gallons of crude oil into a creek just 150 miles from the Standing Rock Sioux protest camp.

The leak is believed to have been caused by a slough of earth on a nearby hillside. It’s “unclear” why electronic monitoring equipment failed to alert the True Cos. oil company to the spill, which has traveled six miles down the Ash Coulee creek and has “fouled an unknown amount of private and U.S. Forest Service land along the waterway.”

Cleanup crews have recovered 37,000 gallons so far, but much of it remains trapped under the frozen river.

Oil spills have been a frequent occurrence in North Dakota, where True Cos. operates three pipelines. In the last ten years, 320,000 gallons of oil have leaked out, the vast majority of which was “never recovered.” The incident highlights just why the Standing Rock Sioux protesters were fighting so determinedly against the proposed Dakota Access Pipeline, which would have not only desecrated sacred Sioux lands but also would have put local water sources in great danger from chemical contamination and spills.

While the Energy Transfer Partners have promised that sophisticated monitoring equipment would prevent spills, the failure of the devices on the Belle Fourche pipeline tell a very different story.

The Army Corps of Engineers denied an easement to Energy Transfer Partners last week, marking a huge victory for the protesters who had stood strong against horrifying violence from police and private security forces. This terrible oil spill confirms that the fears of the protesters were well-founded and is a symbol of what little care fossil fuel corporations show for the natural environment.