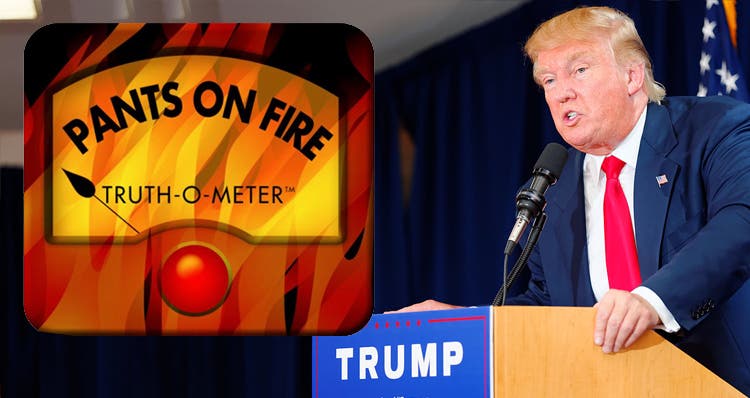 The Republican party is in panic mode after revelations by the Central Intelligence Agency were made public which said the Russian government employed hackers to help Donald Trump win the presidency. Despite the overwhelming evidence the Republican leadership is putting on a bold face to interrupt the public discussion about how Trump manipulated the election, and what should be done to remedy this affront to democracy. The renowned fact checkers at Politifact are holding the feet of Trump and his staff to the fire in proving they are all trying to cover up the same lie.

Earlier today, Trump was quizzed on the subject of Russian hackers while a guest on Fox News. Chris Wallace asked Trump, “The CIA has concluded that Russia intervened in the election to help you win the presidency. Your reaction?” Trump offered his own version of events which were of pure fantasy. He said:

I think it’s ridiculous. I don’t believe it. I don’t know why. And I think it is just…they talk about all sorts of things. Every week it is something else. We had a massive land slide victory in the electoral college. The final numbers are 306 and she had a very low number. No I don’t believe that at all.

Politifact just crumpled Trump’s arguments by laying out the facts:

In fact, in early October, the director of national intelligence, representing 17 intelligence agencies, and the secretary of the Department of Homeland Security said they were confident that the Russian government had directed the email hacks of the Democratic National Committee and a top Clinton adviser. And that the intent was to “interfere with the U.S. election process.”

The claim flies in the face of plain words from two of the highest ranking intelligence and security officials. We rate it False.

Trump’s own position on Russia has changed numerous times. He said he did have a relationship with Vladimir Putin, and he said he never had met him. Trump’s former campaign manager, Paul Manafort, had deep ties to Russian financial interests in deals totaling the billions of dollars. And let’s not forget Trump’s daughter was spotted on vacation with Putin’s alleged girlfriend.

The slimy Trump concluded by claiming the entire scenario is a ruse being put on by Democrats, “I think Democrats are putting it out because they suffered one of the biggest defeats in history.” And why would Democrats have suffered one of the biggest losses in history against a candidate who was the most disliked and distrusted in American history? The two scenarios do not line up logically, and the evidence against Trump is piling up to the ceiling. Soon, congressional inquiries will begin and eventually the evidence will be insurmountable that regardless of what Trump or his team says the public will have no choice but to understand and except the fact that their president obtained his office through cheating.

Politifact found the evidence shows the Russian government did indeed influence the election. No amount of jockeying or spin on political television programs will change that fact.