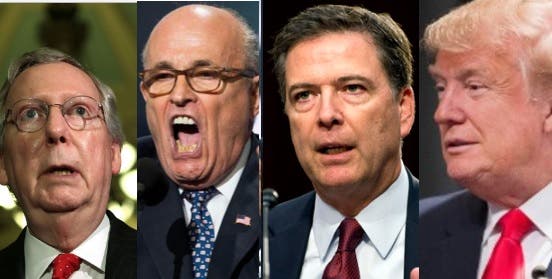 PAC head Scott Dworkin appeared on MSNBC with Joy Reid this morning to discuss his report detailing three decades worth of Trump’s Russian ties when he announced the Democratic Coalition’s plan to formally accuse those four officials.

The Democratic Coalition’s Dworkin authored a widely read report, which President Obama reviewed in November which disputed the FBI’s publicly reported assertions that Donald Trump had ‘no clear ties’ to Russia. A later expansion of the Dworkin Report highlighted 24 specific factual assertions about Trump’s ties to Russia, including 250 registered companies and a three decades long pursuit of business there starting with 1987 visits to Moscow.

The Democratic Coalition is the opposition research wing of a 50-state progressive Political Action Committee. They filed a bi-partisan complaint during the election against the FBI Director, and also uncovered a previously unreleased MSBNC video where Donald Trump says emphatically – twice – that he does in fact have a relationship with Vladimir Putin.

It is a key fact he denied throughout the campaign – even when he wasn’t asked.

After this year’s election, the Democratic Coalition made news for filing a major complaint against Trump’s campaign chairman and Senior White House Advisor-designate Steve Bannon.

The Democratic Coalition’s treason complaint will address the integrated effect of McConnell’s recently revealed suppression of investigatory evidence against Donald Trump’s Republican campaign and the FBI Director’s partisan memo, which Rudy Giuliani indicated that he had prior knowledge of its arrival, and into supposedly secret FBI investigations into Democratic nominee Hillary Clinton.

Even Comey admitted to agents in a later memo that ordinarily the results of an investigation would not be provided directly to Congress, and that he knew the potential for a misleading effect by releasing his memo. Comey’s memo created the political effect of casting the pall of a federal criminal investigation upon Hillary Clinton while keeping Donald Trump’s IRS violations, fraud trials and relationship with Russian dictator Vladimir Putin, whose government broke into Democratic institutions and leaked the contents of all discussions wholesale to Wikileaks.

The most obvious potential quid pro quo involves Republican Sen. Majority Leader Mitch McConnell’s decision to suppress American intelligence reports indicating Russian campaign assistance to help Donald Trump, followed by the post-election surprise announcement of Cabinet position for Elaine Chao, his wife. Uninformed commentators actually consider Chao one of the most respectable choices of the Trump transition, but in actuality, she was complicit in a wide-ranging conspiracy to violate the Hatch Act by the Bush Administration.

Rudy Giuliani gave a giddy interview to Fox News where he referenced what is referred to in political parlance as an “October Surprise” just days before FBI Director James Comey released his now-infamous memo implicating Hillary Clinton in a new email investigation shortly before a national election. By Giuliani’s own admission, he had inside knowledge of the FBI’s investigation into his partisan opponent in the election, and perhaps even the timing of the announcement by Comey itself.

FBI Director Comey plainly abused the powers of his office to interfere in a partisan election, which on its face violates the same federal law Chao broke. It is Justice Department policy to freeze public movement in investigations for the 60 days prior to an election.”

That’s the federal law FBI Director Comey stands accused of violating by dropping his bombshell memo against Hillary Clinton. Elaine Chao got away literally scot-free with using her Cabinet job to help Republicans campaign in 2006 because the Hatch Act’s penalties only involve loss of employment.

Short of a literal smoking gun, no FBI Director should interfere with a partisan election and run afoul of the Hatch Act, as in, unless the FBI is preventing an actual crime in progress. Not only did Hillary Clinton’s emails never rise to the level of a crime in any regard, the October Surprise letter was written before the FBI even had permission to search and turned up literally nothing except a second partisan memo to remind voters of the first letter.

Whether or not these actions actually qualify under the treason laws is yet to be seen.

But what’s clear is that Republicans used a combination of active measures like Comey’s letter, which they back channeled through Rudy Giuliani, with passive cover from Sen. Mitch McConnell’s secret opposition to releasing neutrally developed information that Vladimir Putin and Russia were plainly scheming to help Donald Trump win America’s highest office.

A group of Republican Senators including former Presidential nominee John McCain and Lindsey Graham announced that they are using their Congressional powers to investigate Trump’s Russian ties immediately while calling for a select committee. It’s long past time that old line Republican Senators put their feet down to stamp out the growing Russian influence within their own party.

A President-elect who goes more than a month after the election completely avoiding his first press conference, who goes on victory tours to babble, and who gets into a public fight with America’s intelligence community – all before the Electoral College vote – sends a clear message to those electors that their choice to cast a ballot other than selected by their state’s voters.

In the daylight after the election, Donald Trump’s true character and extensive foreign dealings have been exposed.

Update: Scott Dworkin shared this tweet containing a letter where two US Senators explain the legal framework of both the Espionage Act and the Logan Act as prevailing federal statutes applicable to foreign meddling in an American election.