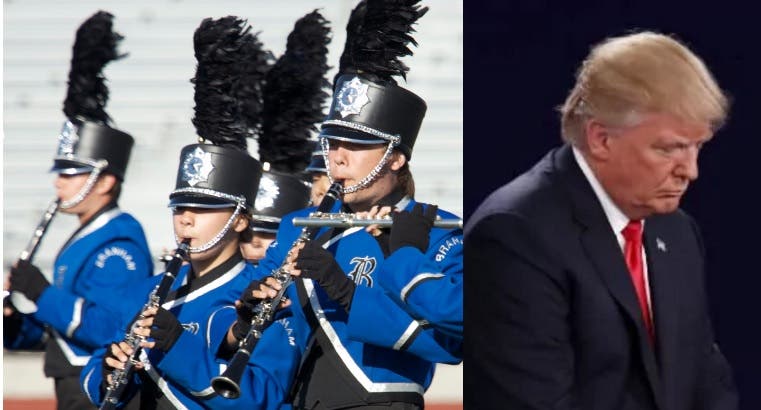 Trump Just Offered An Ambassadorship In Exchange For Inauguration Singers

Donald Trump is so unpopular that not even high school marching bands want the opportunity to perform at his inauguration. Although this is typically an honor for any band asked to participate, there is nothing typical – or honorable – about Trump being named president-elect.

In what has now become a local tradition, a marching band from a public school in DC has had a reserved spot in the parade, and performed over the last five terms, regardless of the president’s political affiliation. This year, however, local schools are claiming everything from budget restrictions to ignorance of an application to just plain, no comment.

Howard University, which also usually participates in the inauguration festivities, has also decided to sit this year out. Band Director, John Newson, commented on the silence and excuses from the local schools, saying, “I think everybody knows why and no one wants to say and lose their job,” Newson said.

It is obvious that the school administration (and no doubt both students and parents) are ethically opposed to Trump, and want nothing to do with swearing him in come January. The Presidential Inaugural Committee would not comment on the amount of applications to perform that were received, as it is doubtful there were many. The application deadline actually had to be extended by a full week, most likely due to lack of replies. Music Celebrations International marketing director Luke Wiscombe described the response as “crickets,” with schools in neighboring Virginia also rejecting the opportunity. “We didn’t get the response that we got the last time, with Obama. Some groups responded, but with some groups it was crickets,” he said.

Also notably, D.C.’s Different Drummers, which is part of The Lesbian and Gay Band Assocation were unafraid to speak out on why they are opting out of parade. The reason is disturbing—it is because they fear for their safety among the hateful droves of Trump supporters. One of the band’s directors described his fears for the band, saying, “While the parade route itself should be a safe zone, we cannot hope to guarantee our safety while traveling, while rehearsing in public or while out and about in the D.C. area during the weekend,” he continued. “All minorities are at risk and any opportunity we give the new administration to co-opt a minority organization will likely be exploited to our detriment.”

So who was Donald Trump able to secure for the main event of the inauguration, the singing of the national anthem, considering that even students—who wait years at the chance at this type of opportunity—are flat out rejecting him? Of course, Trump would never be able to lock-in real talent, like Beyonce, who performed for Obama four years ago. No, Trump had to dig into the trenches of reality TV, an area he actually has expertise in, to poach a sixteen-year-old runner-up of “America’s Got Talent.”

Jackie Evancho, who no one has heard of and who cannot vote herself, will sing to the nation. Unsurprisingly, she is white. Evancho’s response for singing for Trump is opinion-less and ignorant, “It’s going to be awesome,” she told the Today Show.

It’s embarrassing that Trump cannot get an adult to perform the National Anthem, and is unable to recruit children to play in their bands for him. This is by far the most disliked president; no one able to reasonably think for themselves wants anything to do with Donald Trump. His inauguration will no doubt be a hate-filled disaster and with his far right supporters clashing with protesters, he is almost guaranteed to be inaugurated in front of a nation, both divided and violent.