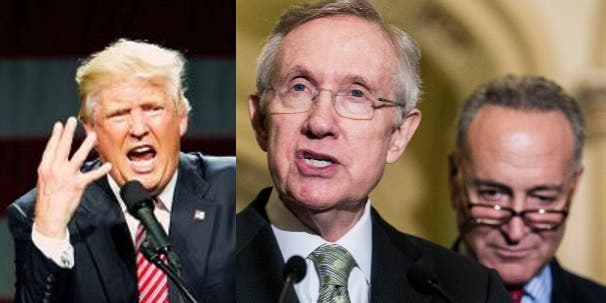 The Difference In Education Between Trump & Obama’s Cabinets Is Staggering

Unless by some miracle Republican members of the Electoral College locate their conscience, Donald Trump will be rubber stamped in a few days as the 45th President of the United States. To prepare for this dark inevitability, a collective resistance front has begun and they are literally taking a page out of the Tea Party’s playbook. In fact, an entire guide has surfaced that lays out a multi-point proposal to legislatively assault the president-elect and his cohorts.

This portion of the resistance against Trump is being led by a gaggle of former congressional staff members who have laid out a path to what they believe can lead to a litany of victories. It may be a difficult pill to swallow to admit the Tea Party was successful in their goals, but that is the reality. The basis of their most common goal was a loathing of the Democratic Party, and to impede the Democrat’s agenda at all costs.

After Trump is inaugurated — and make no mistake he will be — the Republican party will control the House of Representatives, the Senate, and the presidency. The guide offers this thesis statement, “We believe that the next four years depend on citizens across the country standing indivisible against the Trump agenda. We believe that buying into false promises or accepting partial concessions will only further empower Trump to victimize our fellow citizens. We hope that this guide will provide those who share that belief useful tools to make Congress listen.”

There is no silver bullet to defeating the Trumpian golem created by the Republican party. Rather hard work and burning the midnight oil through traditional grassroots activism and active participation in the political process is the order du jour. The guide lays out a crisp and nuanced explanation for how to accomplish this goal, which should be common knowledge. However, many members of the public have lain asleep for far too long, and now that they are facing a peril which has put their entire way of life at risk they have been woken from their slumber.

For example, the guide suggests that individuals gain the attention of their congressional representatives, who hold the keys to Trump’s twisted kingdom, by showing up at the offices of their representatives to demand their voices be heard. Furthermore, they implore individuals to confront representatives when they hold town hall meetings. The goal at said meetings is to appear friendly and non-confrontational to lure the representative to call on them to ask a question. After the door has been opened and the microphone granted then, and only then, are the individuals to strike by asking pointed questions. Most importantly the individuals are not to settle for a canned answer, but to demand a plan which offers a resolution to their grievances.

Above all politicians require being liked to maintain their positions of power. If they begin to receive flak wherever they show up in public, and can not find safety or peace at their own offices this will eventually lead the press to take notice. In turn after the press catches wind of the actions being taken they will begin to cover the politician, as the press loves a story about figurative blood baths in the street between a representative and their constituents. Politicians cannot tolerate their image being tarnished, and through these actions they will be forced to take action to silence and placate those who are causing them so much grief. This is what the Tea Party did, and it is now what Democrats must do as well.

In the face of an unprecedented assault upon the American republic’s sovereignty, constituents of the Democratic party need to abandon their concept of fair play because they are now facing an enemy who does not play by those rules. Democrats must recognize they are involved in a brutal street fight where anything goes — and that the end of stopping Trump will justify the means.

Read the full guide below: