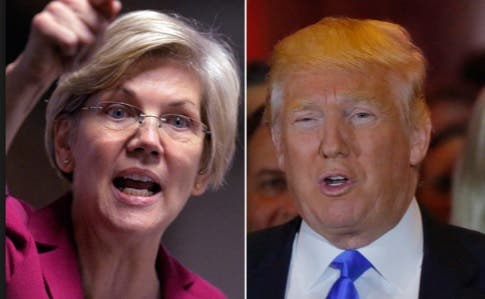 Senate Democrats are planning to introduce legislation that would require Donald Trump to divest any financial assets that pose a conflict of interest and place the money into a blind trust. The bill stipulates that any violation of conflict of interest or other ethics laws by Mr. Trump would be considered “a high crime or misdemeanor under the impeachment clause of the U.S. Constitution,” according to a statement posted on Sen. Elizabeth Warren’s (MA) website.

“The American people deserve to know that the President of the United States is working to do what’s best for the country — not using his office to do what’s best for himself and his businesses,” the progressive Senate leader said. The bill’s other backers include Democratic Senators Ben Cardin (MD), Chris Coons (DE), Dick Durbin (IL), and Jeff Merkley (OR) and it would also require incoming first lady Melania Trump, Vice President Mike Pence, and his wife Karen Pence to divest any financial assets that pose a potential conflict of interest.

As Senator Durbin said, “President-elect Trump’s financial entanglements are unprecedented in American history, and the American people are still waiting to hear what steps he will take before January 20th to guard against conflicts of interest and corruption in his Administration.” Never before has there been a president-elect so thoroughly enmeshed in the world of big business, and there has been precious little indication from Trump that he is interested in avoiding conflicts of interest as President. On the contrary, his manipulation of the election campaign to line his own pockets and formulation of foreign policy on the basis of personal economic interest suggests that Congress and the American people will have to be vigilant in policing his kleptocratic tendencies.

The new bill is only part of a far-reaching campaign by Senate Democrats to assure that Trump’s financial interests do not influence his rule. Just last week twenty-three Senators sent a letter to Trump warning that his business ties “have the potential for serious conflicts between the national interest and your personal financial interests.” Additionally, Sen. Tom Carper (DE) released a letter from the Office of Government Ethics stating that Trump’s announced plan to turn over the Trump Organization to his oldest children would not be sufficient to avoid conflicts of interest.

Even that plan – which was supposed to be formally announced today – has been repeatedly delayed by Mr. Trump, in part because he decided he had to meet with Kanye West instead. Trump advisor Kellyanne Conway said that the announcement of his divestment would be delayed until next month because of “how convoluted and complex many of these business interests are,” although Trump, never one to avoid some juicy hypocrisy, took to Twitter soon after to lambast the media for presenting his financial situation as “so complex when it actually isn’t”

Perhaps even more than Trump himself, many of his cabinet picks come with conflicts of interest that would be disqualifying under any other administration. His cabinet is worth a combined $14.5 billion, far more than any other in history, and is stacked with corporate titans hailing from every exploitative corporation from Exxon to Goldman Sachs to Gazprom. The new bill does propose to block cabinet members from participating in matters directly linked to Trump’s financial interests, but it is clear that far more needs to be done to protect the country from this unprecedented oligarchic infiltration of our government.