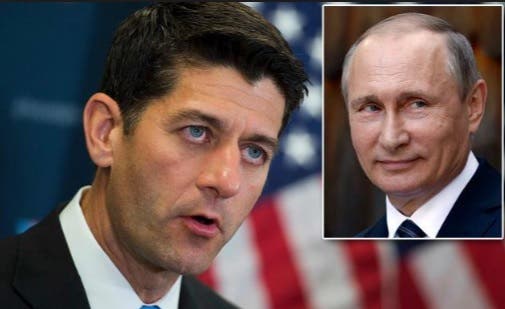 The Republican Party benefited from Russian hackers’ theft of emails outside of the race for the White House, and a New York Times report is detailing exactly how the GOP did it. The Congressional Leadership Fund Super PAC (CLF) linked to GOP House Speaker Paul Ryan created a series of ads across multiple states using hacked emails from the Democratic Congressional Campaign Committee (DCCC) which is the main party legislative fundraising vehicle. Russian hackers made it all possible, and their assistance was indispensable in the Republican party’s national political campaigns this year, even though Democrats urged their counterparts to avoid collaborating with the Putin regime against American interests for their own partisan political advantage. The Times reports:

“This is not a traditional tit-for-tat on a partisan political campaign, where one side hits the other and then you respond,” said Kelly Ward, executive director of the D.C.C.C. “This is an attack by a foreign actor that had the intent to disrupt our election, and we were the victims of it.”

The thefts occurred last spring when a staffer clicked on a phished email this past spring by the Russian group called Guccifer 2.0, and first resulted in the doxing of home addresses for Democratic legislators and later, much much worse. Even House Minority leader Nancy Pelosi was forced to change her personal cellphone number after it became flooded with abusive and threatening messages, as were numerous Democratic Congresspeople.

Then the hackers began to interfere in Democratic Congressional primary campaigns with targeted releases, including one Guccifer 2.0 release right before a televised debate in Miami, Florida. The results were predictable: chaos. Democrats locked in heated races had no choice but to respond once the mainstream media began publishing the stolen material without regard for the source or motives of the hackers, and ultimately those media outlets spread the pilfered party paperwork quickly in ways that often damaged both candidates in the race.

“The DCCC told us that the FBI informed leadership that it was a Russian hack, and to be weary of surfing to that website in case hackers wanted to infiltrate our devices,” said Annette Taddeo, a Florida Democrat who ran for Congress in Miami – in her exclusive comments to Occupy Democrats, “the timing was interesting because it came just two weeks before the primary. They got our internal polling, they got our internal memos about our strategy, everything.”

“It’s a shame that no Democrat got to speak about the issues important to the voters, because the news media was focused on the importance and contents of the leaked documents.” Juan Penalosa managed Democrat Joe Garcia’s congressional campaign against Taddeo and told Occupy Democrats exclusively, “Be it Annette Taddeo, Hillary Clinton or Joe Garcia they all wanted to speak with voters about the issues, but were forced to respond to media reports that ultimately voters didn’t care about.”

The Taddeo campaign’s entire opposition research book was compromised and so were the DCCC’s internal studies of the candidate’s strengths and weaknesses – known as ‘self-oppo’ research profiles – were also pilfered and disseminated in ways damaging to the Democrats’ campaigns. The ads in Florida boldly claimed that “even Democratic party bosses thought…” (fill in the blank with self-opposition research commentary here). In Pennsylvania, hackers revealed that Democrats were hoping to have a primary challenge to an incumbent congressman, but failed, leaving the candidate weakened with donors and ultimately succumbing at the ballot box.

The Russian hackers also played kingmaker in the blogosphere, dishing stolen documents to small time Republican bloggers in Florida and New Hampshire, one of whom shared his twitter conversations with the New York Times:

In Florida, Guccifer 2.0’s most important partner was an obscure political website run by an anonymous blogger called HelloFLA!, run by a former Florida legislative aide turned Republican lobbyist. The blogger sent direct messages via Twitter to Guccifer 2.0 asking for copies of any additional Florida documents. “I don’t think you realize what you gave me,” the blogger said, looking at the costly internal D.C.C.C. political research that he had just been provided. “This is probably worth millions of dollars.” Guccifer 2.0 wrote back: “Hmmm. ok. u owe me a million.”

According to Salon, even the DCCC’s chair was targeted, which was done in what he Rep. Ray Lugan told The Times was a ‘clear effort to send a message to the party leadership — that the hackers wanted to try to hurt Democrats at all levels of the party’:

Guccifer 2.0 targeted the chair of the DCCC, New Mexico’s Ray Lujan, the Democrats sent a letter to his Republican counterpart on Aug. 29 arguing that “the NRCC’s use of documents stolen by the Russians plays right into the hands of one of the United States’ most dangerous adversaries,” and if the National Republican Campaign Committee continued using the materials, the GOP “will be complicit in aiding the Russian government in its effort to influence American elections.”

“It’s dangerous territory that we’re moving into,” says Taddeo, who ran for Florida’s Lt. Governor position in 2014 after chairing Miami-Dade County’s Democratic party, “The shoe could always be on the other foot, which is why I never used any hacked information. It shows the troubling effect of Russian involvement against even a single Congressional race. I lost. I’m ok with that, but I’m not OK with the Russian influence, and I don’t think that anyone should be OK with that, Republicans or Democrats. I am trying to make sure this never, ever happens again.”