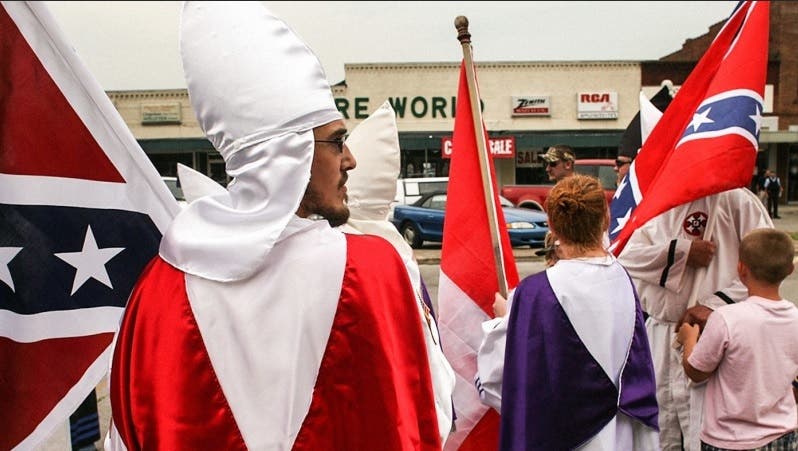 The A&E Channel decided that giving a whole lot of attention to the KKK will generate big ratings, so they’re launching a show 15-months in the works come January called “Generation KKK.” While not all of Donald Trump’s supporters are racists, all of the KKK’s support and the KKK’s formal public newspaper endorsement of the Republican’s presidential campaign comes from racists who’ve got to be thrilled to get national attention for their 150-year old terror organization.

A&E’s parent company is a joint venture of ABC/Disney and Hearst Corporation and is well known for exploring edgy topics like Cults (bad) and disseminating the racist views of Duck Dynasty (ok, after a short suspension) to America’s cable tv audience. The “Generation KKK” show follows a few anti-racists who cluelessly participated in a program that can only give the KKK a kind of viewership they’ve never experienced, nor should they.

Just note how thrilled the white supremacist group called white supremacy, filled with preppy Heil Trump-ing neo-nazis were, just to get a single mention in one of Hillary Clinton’s speeches this year. But A&E’s ratings demand ever greater thrills, even to the point of normalizing a white terrorist group so evil, that the federal law enabling lawsuits for deprivation of civil rights is derived from the KKK Act of 1871.

Readers might recall that an Ohio federal judge slapped a restraining order against the Trump Campaign and Roger Stone his right-hand man, for apparent violations of the KKK Act in October. The entire reason for the Act was rampant acts of civil terror by the Klan aimed at voter intimidation committed by the group in the post-Civil War south. During the Jim Crow-era, the KKK regularly lynched – vigilante murder by hanging, ignored by local authorities – African-Americans throughout the south. During the 1960s, the KKK’s terror operations – besides cross burning – included blowing up black churches and killing African-American children.

No major network is planning a reality TV show about Daesh (ISIS/ISIL) or al-Qaeda, who are both admittedly are newer entries in the market space of murder, bombings, and terror. However, since their brand of terror is un-American, based on a perversion of Islam instead of a perversion of Christianity, and because their faces are a little too brown to go network, producers won’t get the green light from corporate.

No reasonable person would ever advocate for a reality TV show about ISIS or Al-Qaeda, because it would fulfill their goal of promoting stochastic terrorism, and to humanize their cause in a way sure to cause random acts of terror.

That is why no reasonable cable tv network executive – and we have no factual proof such a person exists – should produce or broadcast a program that can only serve to normalize the Klu Klux Klan to our country. One of them told the New York Times this:

“We certainly didn’t want the show to be seen as a platform for the views of the KKK,” said Rob Sharenow, general manager of A&E. “The only political agenda is that we really do stand against hate.”

It’s not stopping A&E from making the program revolve around the hate groups – from the title and marketing on down – instead of on the groups of brave souls who escaped the brainwashing documented in this series, one of which Serve 2 Unite made a major error in judgment by (presumably taking the money for appearing on the television show) allowing their work to be used by a couple of massive media companies in their KKK program.

So why is A&E Networks planning on running a season of television programming that can only serve to normalize racism in America by giving screen time to our country’s most insidious white terrorist organization?

It’s all about color.

Not white or black, but green.