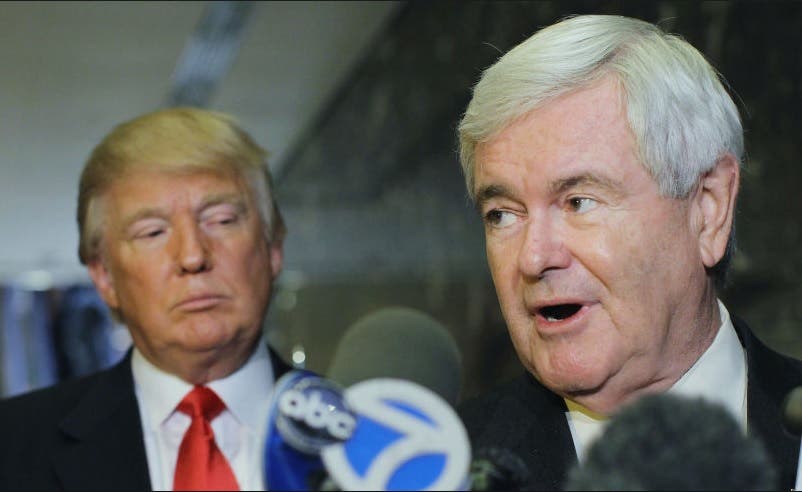 “I’m told he now just disclaims that. He now says it was cute, but he doesn’t want to use it anymore,” the former House Speaker and close Trump adviser said of the “drain the swamp” message in an NPR interview published Wednesday morning. “I’ve noticed on a couple of fronts, like people chanting ‘lock her up,’ that he’s in a different role now and maybe he feels that as president, as the next president of the United States, that he should be marginally more dignified than talking about alligators in swamps.”

Just six weeks after the general election, Donald Trump has run away from one his largest campaign promise, to “drain the swamp” and to get rid of corruption in Washington D.C., the backroom dealing and curtail the influence of lobbyists. Since winning the presidenc,y Trump has announced the appointment of a multi-billionaire Cabinet of oligarchs, all of whom are poised to cash in on his promised massive tax breaks.

The line “drain the swamp” was both Trump’s main closing refrain, and the sole tangible, coherent governing policy that anyone could point on the campaign trail, outside of his racist and enormously impractical idea of building a wall.

A recent poll asked Trump voters ‘if you had to pick one single reason why you chose him, why?’ and 18% of respondents said that he would “change business as usual in Washington, D.C. The media allowed Trump to spin his “hokey” scripted line to “drain the swamp” as an actual pledge that the billionaire Trump would curb the influence of the Wall Street banks he owes money to, and corporate lobbyists he hires to cut back-room deals.

If you took that conclusion to its logical limit, that’s over 11,000,000 Trump voters who he’s betrayed as suckers in his bet that they’d actually believe anything that comes out of his mouth when he’s busy pandering in public.

Twenty-seven percent polled want Trump – the guy who just whacked Indiana’s taxpayers with an outrageous corporate welfare handout in his terrible Carrier deal – to make the economy work better for the middle and working class. Nearly a quarter said they wanted Trump to look out for America first instead of focusing on other countries, which can’t possibly happen with his myriad foreign business entanglements that have already led to him completely excluding Russia from his national defense plans!

Donald Trump treats politics like a simple movie script, just speak the words your handlers feed you – if you feel like it – and then walk away from all promises and ideas a week or two later. Now, Trump supporters own a failed presidency in the waiting which controls all three branches of government and by its own hand in choosing a group of uniquely unqualified people to hold high office.

Watch Trump admit that he never planned to “drain the swamp” or reform Washington:

In same poll, Trump voters were asked to pick just one reason why they voted for him and just 5% said immigration: pic.twitter.com/rRrQvem9hk