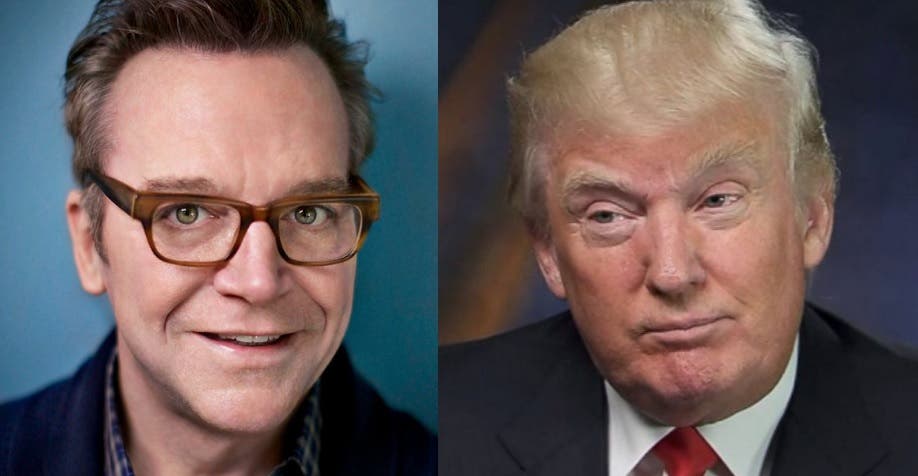 Comedian and Actor Tom Arnold tweeted yesterday suggesting the world may get a late Christmas (or Chanukah, or Kwanza) present in the form of a trove of audio tapes recorded during President-elect Donald Trump’s time as host of The Apprentice that, according to Arnold, include accounts of Trump “walking in on naked teens.”

Arnold, who first told KIRO Radio’s Dori Morrison last week that he has tapes of Trump “saying every racist thing ever,” sent out a series of tweets Christmas Day in response to questions about the tapes. The actor said the tapes are “will be reviewed soon” and that “smart smart Watergate level journalists are ontop (SIC) of this.”

Of course the world already knows about Trump’s penchant for making pervy comments off camera, need we be reminded of how told Access Hollywood that he would sexually assault women by “grabbing them by the pussy.”

But Arnold gave slightly more detail about the content of the recordings he claims to possess.

None of the recordings he’s heard include anything illegal, Arnold said, but are disgusting none the less. The actor also said he confronted seven Hollywood executives about releasing the tapes before the election.

The recordings first materialized early in Trump’s campaign for president as outtakes in a corporate Christmas spoof video, but Arnold said he didn’t take his candidacy serious at the time and didn’t consider publicizing them. The tapes are sealed under a $5 million confidentiality agreement and have only been shared internally among executives, Arnold told KIRO.

Ultimately Arnold is hoping to spur Trump into a lawsuit, he tweets, which could cast the tapes into the public domain – but he’s sure that there are other ways the tapes will reach the public, as the last tweet of his explanation reveals:

Between us a lawsuit is my goal on both my Apprentice & tax claims. Then HE has to leak them to prove I lied & no one gets hurt. Except DT:) https://t.co/0BZbskwroT

14. Watergate level journalists are ontop of this. https://t.co/scvnHY836l

Who can say whether another round of repulsive comments will have any effect on Trump’s presidency. Regardless, the nation’s image of its commander-in-chief is still materializing, and newly added material will bolster the paper trail of filth already following him into the White House.