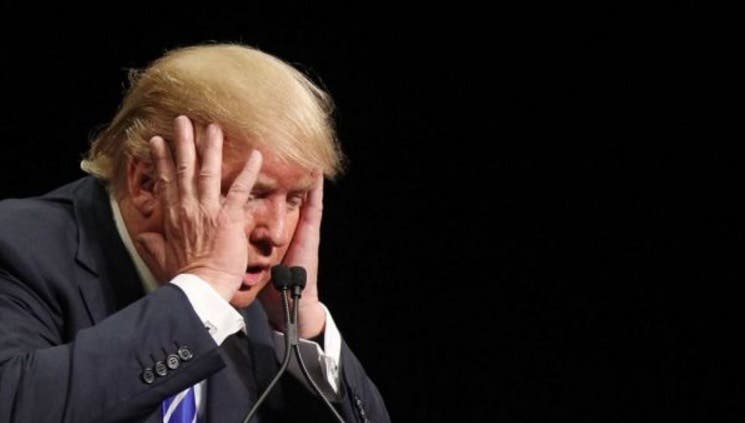 Donald Trump’s desperate attempt to dissolve his corrupt charitable foundation during the holiday weekend was blocked today,  so the President-elect did what he does best; he lied a lot on Twitter. In October, the Trump Foundation was busted giving a $100,000 political donation to Citizens United and a grand total of $268,000 to various conservative Republican groups to buy his way into high-profile speaking gigs like CPAC and favorable reviews from evangelical groups.

The PBS Newshour took Trump to task for lying about using all 100% his foundation’s money for charitable purposes:

LISA DESJARDINS: He posted two tweets, staunchly defending the Donald J. Trump Foundation, his private charity, as both generous and efficient. But those tweets ricocheted. Some say they are misleading or plain false…

Tax filings show he donated nothing to the foundation in recent years. Instead, most of the foundation’s funding, about $9.5 million, has come from outside donors, including Vince and Linda McMahon, the professional wrestling tycoons. Linda McMahon is now the Trump nominee to head the Small Business Administration. The couple gave $5 million in two years.

That’s right, the Trump Foundation’s largest donor got a high ranking federal office making loans to America’s small business community after donating $5 million to the slush fund and topping it off with an additional $6 million in Super PAC spending in this year’s election.

Ever since September, Florida’s major market newspapers have been demanding a federal investigation into the apparent political deal forged with an illegal campaign contribution from Donald Trump’s charitable foundation to Florida Attorney General Pam Bondi while her office investigated the Trump University scam.

DAVID FAHRENTHOLD, The Washington Post: They gave to this group called And Justice For All, which is a political campaign committee helping Florida Attorney General Pam Bondi, who, at the time, just happened to be considering, her office was considering whether to pursue an investigation against Trump University. They, later on, after the money came in, decided not to pursue that investigation. Trump paid that money out of the Trump Foundation, which is against the law.

One of Trump’s tweets was rated as actually true (a serious rarity) that he didn’t charge rent or take a salary from the failing foundation, but according to PBS’ Desjardins, the family ties Trump bragged about are also liabilities when it comes to mixing business and charity:

Charities are not supposed to directly benefit or overlap with for-profit businesses like the Trump Organization, and that’s one reason the New York state attorney general is investigating the charity.

A prime example of the dangers of family members running charities is the $885,000 funneled from the Eric Trump Foundation to Donald Trump and the family’s businesses over a 10-year period. Trump’s son closed his foundation last week too, occasioning bitterly sad tweets by The Donald – most likely over the lost revenue stream. Eric Trump lied to donors and claimed that all donations would benefit St. Jude’s Hospital (click here to donate directly to help sick children, without the middle man).

Trump has been struggling to wind down the affairs of the 28-year-old Donald J. Trump Foundation after it was ordered to provide a rigorous audit by New York State authorities, which is required of foundations raising more than $25,000 per year for outside donors. Over a million dollars was raised by the foundation during a publicity stunt where Trump skipped a Fox News debate to avoid Megyn Kelly, and months later he only donated the sum he personally promised to contribute to a veteran’s charity – only after media outlets called him out.

Just last month, Trump personally admitted in writing to the IRS that he engaged in unlawful enrichment from his charitable foundation, and engaged illegal self-dealing. It’s unknown if the IRS has opened a parallel investigation into years of apparently false filings by Donald Trump about his foundation, but it’s not unreasonable to imagine that it could happen by a career employee now that the admission has been submitted.

New York’s Attorney General Eric Schneiderman has already obtained a $1 million dollar fine from Trump to settle the Trump University fraud case this year. Now that the NY AG is keeping open the Donald J. Trump Foundation for the duration of his probe, Schneiderman may be aiming for an even larger case against the President-elect next year.