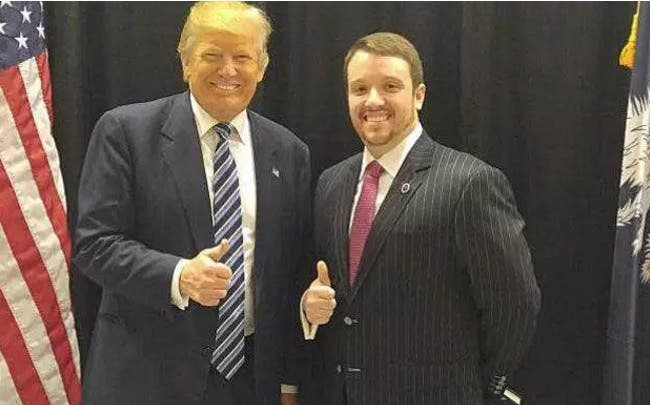 Trump Just Launched A Childish Attack On Pres. Obama For No Reason

Trump-loving South Carolina Republican State Rep. Chris Corley came home one day to find his wife confronting him with evidence of his extramarital affair. The “family values” man reacted by punching her in the face and beating her senseless until their children arrived home. Police said “Corley only stopped assaulting her because he heard kids screaming and noticed blood coming from her head.”

Their children are two and eight years old.

At this point, Corley went to his car, retrieved a firearm, and threatened to shoot her with it and then himself with it, retreating into a room in the house with his gun, before lying to police and claiming to be the victim. He was subsequently arrested and posted a $20,000 bond. The Charleston Post and Courier reports the state representative is best known for his recent Confederate flag-themed Christmas cards, which accuses his fellow Republicans of lacking “morals, convictions, and principals.”

Corley has been charged with felony domestic violence:

State Rep. Chris Corley, R-Graniteville, is to have no contact with his wife and cannot be in possession of a firearm, Magistrate Melanie James DuBose said. Corley, 36, is charged with first-degree domestic violence and pointing and presenting a firearm, according to charges filed by the Aiken County Sheriff’s Office.

Aiken deputies responded to Corley’s home Monday on Sugar Hill Drive in Graniteville at about 10 p.m. His wife told them Corley punched her in the face. She told deputies the incident occurred in front of two children, ages 2 and 8, after Corley had been “caught cheating.” She also told deputies Corley only stopped hitting her when he heard the children screaming and saw blood coming from her head.

Corley then left the home and went to an unknown vehicle where he got a handgun before returning and pointing it at her. Corley announced he was going to kill himself and then went into a bedroom.

In South Carolina, a state Representative indicted on felony charges is automatically suspended from their elective office. Rep. Corley isn’t convicted yet, but he’s certainly given himself a chance to prove to fellow Republicans his own conviction or lack thereof soon.

Here’s what he wrote to colleagues earlier this year, who decided to remove a Confederate flag from South Carolina’s capital because it’s the racist symbol brandished by the white terrorist convicted of killing nine African-Americans – including a state lawmaker – in the mass murder at the Zion Emanuel AME:

Corley’s holiday card starts with: “May your Christmas be filled with memories of a happier time when South Carolina’s leaders possessed morals, convictions and the principles to stand for what is right.”

It ends with: “May you have a blessed and happy Christmas, and may you take this joyous time as an opportunity to ask for forgiveness of all your sins such as betrayal.”

Perhaps a more appropriate holiday card from Rep. Corley would beg his wife for the forgiveness of his own sins, instead of trying to scare her literally to death and beating her head in near their two children. Rep. Corley voted for a bill last year that strips gun privileges from anyone arrested for a domestic violence charge that conservatives called a “gun grab.”

Fortunately, the state of South Carolina has used their just authority to regulate gun ownership to seize Rep. Corley’s firearm while he awaits trial. It’s a sharp reminder that domestic violence is still a huge problem in the United States. Three women are murdered by their current or former partner every day; one in four American women will be the victim of severe violence from a partner in their lifetimes. For Chirs Corley to invoke “morals” and “principles in defense of a mass murderer and then to commit such a heinous act against the mother of his children is the lowest and most vile of hypocrisies.

Look to Chris Corley if you want to know what Republican “family values” are all about. Or to our president-elect, Donald Trump, who once tore his wife’s hair out and raped her because he had a literal bad hair operation.