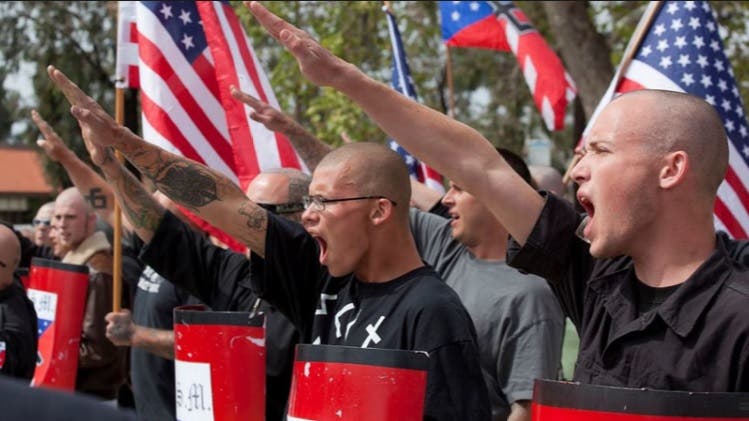 Donald Trump’s revolting white supremacist/neo-Nazi followers are already dissatisfied with the President-elect’s performance and are ready to ‘revolt.’ Never mind that Steve Bannon who turned Breitbart into a white supremacist platform for white nationalists has been named as a Senior White House Advisor, even the fringe-right is telling the world why; it’s what they do, reports The Guardian:

In an email interview Peter Brimelow, founder of the webzine Vdare.com, which alleges Mexican plots to remake the US, said Trump’s failure to deliver “important bones” could trigger a backlash. “I think the right of the right is absolutely prepared to revolt. It’s what they do.”

There is, however, a catch: Weber, Taylor and Brimelow – all classified as “extremists” by the Southern Poverty Law Center – said Trump’s victory energised the far-right and that the movement can grow with or without White House help. The young crowd that roared “Hail Trump” at last month’s gathering in Washington will fight for its beliefs no matter what, Brimelow said. “None of them were looking for jobs in the Trump administration. These are not party loyalists. They know they’re entirely outside the establishment consensus. And they’re used to guerrilla warfare.”

After Trump’s win, some the revolting white supremacy supporters who led an online wave of race hate met in Washington, D.C. looking for national exposure for their neo-nazi messaging:

A few weeks after Trump’s victory the innocuously named National Policy Institute, which espouses an “ethno-state” for Americans of European descent, held its annual conference in the Ronald Reagan Building a few blocks from the White House.

Its leader, Richard Spencer, concluded the event by shouting “Hail Trump! Hail our people!” and “Hail victory!”, an English translation of the Nazi exhortation “Sieg heil”. Some audience members gave the Nazi salute.

Hate groups revolve around disaffection and attention and then commit acts of violence against the targeted groups they use as scapegoats. Bold public statements like these from racist thought leaders about Trump’s overall effect on their movement serve as confirmation of his Republican campaign’s consequential use of stochastic terrorism as a communications strategy. If Trump does truly abandon his staunchest supporters by refusing to terrorize immigrants himself, their anger raises the shadow of violence within the Republican’s big tent of racists, religious bigots, anti-Jew and American oligarchs.

The main obstacle to a rapid advance by these neo-nazi forces is infighting:

Donald Trump’s use on the campaign trail of vague statements about minority groups to incite hatred have already had national consequences and spurred a hate crime wave of ethnic and religious discrimination.

The splintering of Trump’s white supremacist supporters only portends more grievance driven violence, and the Republican party faces specter that some of that hate criminals could begin to target some of the GOP politicians or their familiars, who have ridden a wave of Russian hacking attacks and twisted, dark hatred into power during 2016’s electoral races in America.