One of President-elect Donald Trump’s closest allies and confidants, Carl Paladino, has been marred in a racist scandal. Paladino is, for now, a member of the Buffalo, New York School Board. In all of his brilliance, Paladino wrote numerous despicable comments about President Obama, Michelle, and his family. Then those remarks were accidentally sent to a newspaper by Paladino. Now the fallout from Paladino’s foray into being a public racist has come to a head with some very real professional consequences along with a sharp rebuke from his boss (video below)

School Board President Barbara Seals Nevergold has nothing but contempt for Paladino. She began:

Words matter, Mr. Paladino. Our president, the Commander in Chief of this nation for the last eight years, Mrs. Obama, our First Lady, and Mrs. Valerie Jarrett, special presidential council are all African-Americans. Among other things, they are accomplished, intelligent, beautiful people and that’s not just my opinion.

Nevergold went on to describe her concerns about the quality of education students would receive with individuals like Paladino charged with administering that education:

The impact on children of color, especially African-American children is incalculable. How do we encourage them to use their God-given talents to soar, to reach for the stars, when a sitting board member responsible for their education demonstrates such contempt of their role models?

In closing her remarks Nevergold issued a dig against Paladino’s buddy Donald Trump when she said, “They would like me to tell you, ‘You’re fired!'”

Paladino’s fellow board members voted 6 to 2 on Dec. 29 to call for Paladino’s immediate resignation. Watch the vote below:

#BREAKING resolution calling for @CarlPaladino to resign from the @Buffalo_Schools BOE in 24 hours passes 6-2 @WGRZ pic.twitter.com/8T6an1ukCG

In a statement Paladino indicated he has no intention to resign and said, “Not when it’s time to help implement the real choice elements of Trump’s plan for education reform.” The board members were prepared for Paladino’s belligerence and if he refuses to resign they will “retain outside counsel” and move to have Paladino formally removed by the New York State Education Commissioner MaryElle Elia. For their part, the NY Education Department is aware of the situation and if called upon will review the evidence against Paladino “as quickly as possible.”

All of this trouble for Paladino could have been avoided if he knew how to properly send an email. Apparently Paladino was sent a survey from ArtVoice, to which Paladino claims he filled out sarcastically. He also claims he meant to send his sarcastic replies to friends, and rather than forwarding the email, he sent it back to the original source and his words were published in their entirety. Read them in their hideous glory below: 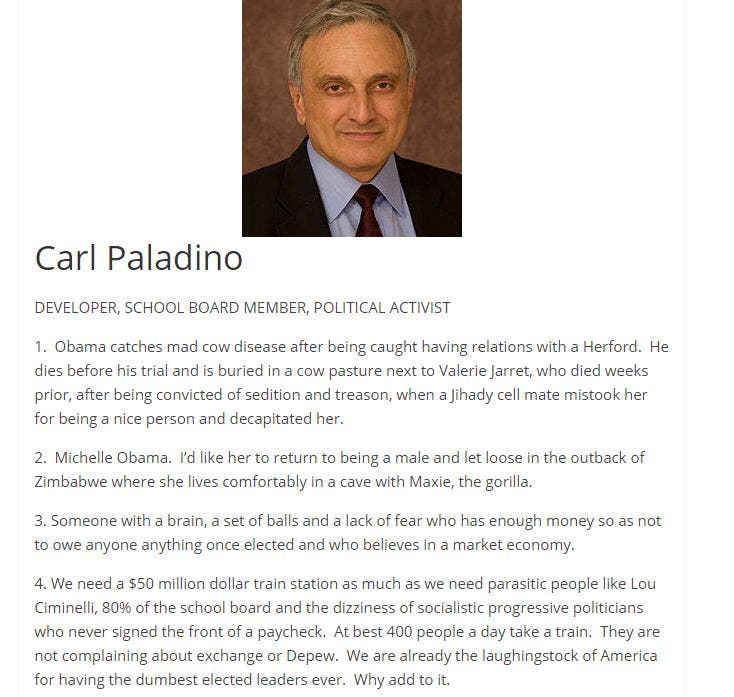 In an effort to save face Paladino issued a mild mea culpa:

I did not mean to send those answers to Artvoice. Not that it makes any difference because what I wrote was inappropriate under any circumstance. I filled out the survey to send to a couple friends and forwarded it to them not realizing that I didn’t hit ‘forward’ I hit ‘reply.’ All men make mistakes.

This was not Paladino’s first public embarrassment either. He once was caught sending an email that had the phrase, “run nig*er run!” Naturally, Paladino said the public was unfairly painting him as a racist. Was Paladino being sarcastic with his racism? Does he actually love black people? One can wager either way they like, but the majority of the money is likely going to go in one direction.