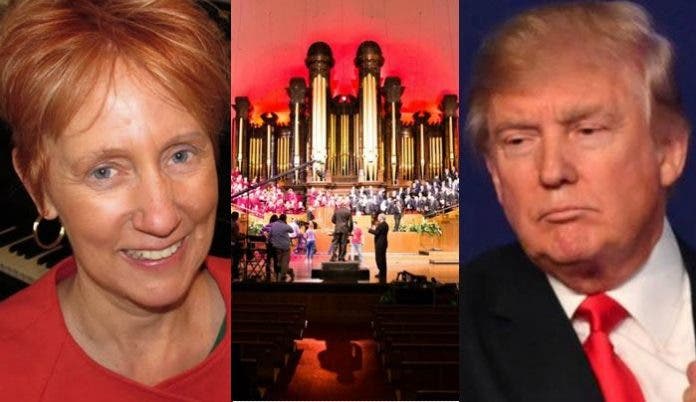 Add at least one member of the Mormon Tabernacle Choir to the list of talented performers running in the opposite direction of the Jan. 20 inauguration of President-elect Donald Trump. A devoutly Christian singer is leaving the choir, one of the most sought after singing groups in the world, to avoid performing before Trump.

Jan Chamberlin, of Salt Lake City, told Facebook that the prospect of singing at Trump’s swearing-in — in her words, “endorsing tyranny and fascism by singing for this man” — left her in agony. After being attacked by Trump fans,  she deleted the post, but Egberto Willies has the following transcript:

“Since “the announcement”, I have spent several sleepless nights and days in turmoil and agony. I have reflected carefully on both sides of the issue, prayed a lot, talked with family and friends, and searched my soul. I’ve tried to tell myself that by not going to the inauguration, that I would be able to stay in Choir for all the other good reasons. I have highly valued the mission of the Choir to be good-will ambassadors for Christ, to share beautiful music and to give hope, inspiration, and comfort to others. I’ve tried to tell myself that it will be alright and that I can continue in good conscience before God and man. But it’s no use. I simply cannot continue with the recent turn of events, I could never look myself in the mirror again with self-respect.

Looking from the outside in, it will appear that Choir is endorsing tyranny and facism by singing for this man. And Choir’s wonderful image and networking will be severely damaged and that many good people throughout this land and throughout the world already do and will continue to feel betrayed. I believe hereafter our message will not be believed by many that have loved us and adored what we have stood for.

Tyranny is now on our doorstep; it has been sneaking its way into our lives through stealth. Now it will burst into our homes through storm. I hope that we and many others will work together with greater dilligence and awareness to calmly and bravely work together to defend our freedoms and our rights for our families, our friends, and our fellow citizens. I hope we can throw off the labels and really listen to each other with respect, love, compassion, and a true desire to bring our energies and souls together in solving the difficult problems that lie in our wake.

History is repeating itself; the same tactics are being used by Hitler (identify a problem, finding a scapegoat target to blame, and stirring up people with a combination of fanaticism, false promises, and fear, and gathering the funding). I plead with everyone to go back and read the books we all know on these topics and review the films produced to help us learn from these gargantuan crimes so that we will not allow them to be repeated. Evil people prosper when good people stand by and do nothing. We must continue our love and support for the refugees and the oppressed by fighting against these great evils.

I only know I could never “throw roses to Hitler.” And I certainly could never sing for him.”

Chamberlin bravely joins a member of The Rockettes who has protested that group’s selection to perform at the inauguration, although Madison Square Garden Company, which owns and manages the dance troop, has said it will not mandate specific dancers to perform at the ceremony.

CNN points out that Trump’s organizers have yet to name any other celebrities with planned appearances at the event. Obama’s inauguration featured performances by Beyonce, James Taylor and Brad Paisley, to name a few.

It appears the nation’s intelligentsia want no part of this coming moment in history.