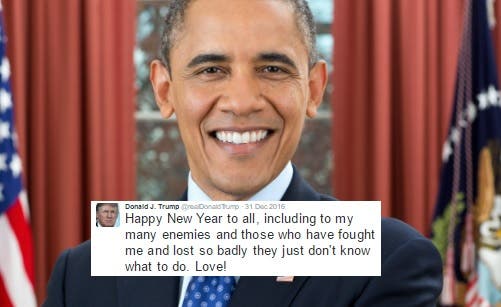 Our beloved President Barack Obama just released his final New Year’s message – and it puts our president-elect’s childish taunting to shame. Our POTUS looked back on all we have achieved as a nation in the past eight years, the recovery we’ve made from the disastrous Bush years and the progress we’ve made as a people.

Hearing him list off some of his accomplishments, one can only swell with pride at his genuine pleasure he expresses – not because he’s proud of personally having overseen it, but pride at the resilience of the American people and honest gladness that their lives are better. The Obama Recovery has been a huge success. 20 million more Americans have affordable healthcare, an all-time high graduation rate from high school, average household income is up by 5.2%, same-sex marriage has become the law of the land, diplomatic relations re-established with Cuba, and the signing of the historic Iranian nuclear peace treaty are just some of the things that he’s done over the past eight years to make our country stronger and safer for the future.

He ends on this humble note:

‘It’s been the privilege of my life to serve as your President. And as I prepare to take on the even more important role of citizen, know that I will be there with you every step of the way to ensure that this country forever strives to live up to the incredible promise of our founding—that all of us are created equal, and all of us deserve every chance to live out our dreams. And from the Obama family to yours—have a happy and blessed 2017.’

Such leadership and humility are shockingly absent from the holiday greetings sent out by President-elect Donald Trump, who instead decided to taunt his enemies and labelled anyone who criticizes him an enemy of the country. The comparison between the two couldn’t be more obvious, and we can only hope that the checks and balances installed in our government will be able to protect President Obama’s achievements from the greedy plots of Trump, his fellow oligarchs, and the safety-net cutting Republicans in Congress.