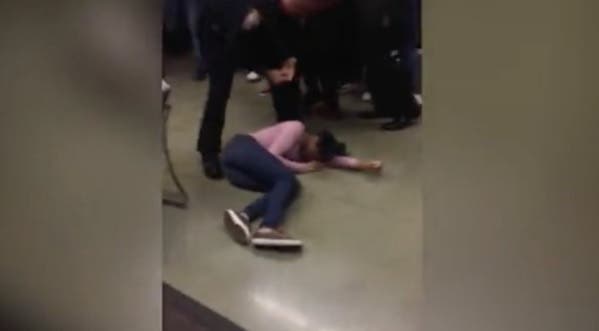 In this extremely disturbing video from Rolesville High School in North Carolina, Officer R. De La Santos decided it would be appropriate to pick up a female black student and brutally body-slam her to the concrete floor.

While officers in North Carolina must wear body cameras, it doesn’t seem to have any effect on lessening the amount of violence. Three months ago, a black student was tackled and pepper-sprayed by police officers in another video that went viral on social media.

“This is very disturbing and everyone watching is very disturbed by what it captures…this kind of force is never justified, especially for kids who go to school to learn. There are guidelines that cover [police] conduct in schools, they’re supposed to be trained…based on what we know now from the video, it does not appear to show a reasonable use of force” says ACLU staff attorney Irena Como.

There are 43,000 “school resource officers” that help to keep our kids safe but also bring the racially motivated aggression and violence that police officers tend to show against black Americans into the classroom.

“The first time a lot of black and brown children experience police violence is in a school building. The first place that our children learn to fear police, learn they’re controlled instead of empowered, is in a school building. That’s a perversion of the system of public education that we absolutely cannot allow, and that we cannot disconnect from this broader conversation about police violence” says Teach For America official Brittany Packnett.

Racial tensions in our country haven’t been this high in decades, and this kind of appalling behavior from our police officers is a clear example of why the Black Lives Matter movement is so important and why black Americans are so frustrated with law enforcement.