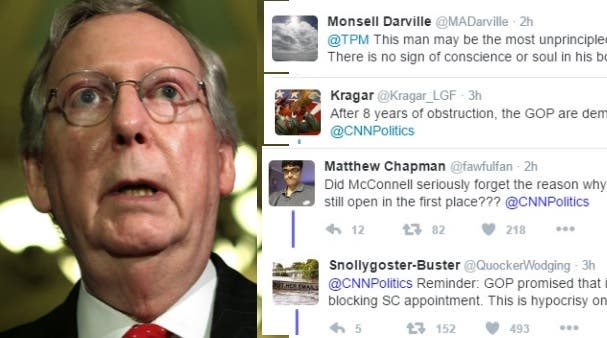 Twitter Just Erupted At McConnell For Complaining About Democratic Obstruction

Senate Majority Leader Mitch McConnell (R-KY) proved for the umpteenth time today that he is an ideologically vacant hypocrite with absolutely no sense of shame or irony when he decided to chastise Senate Democrats for vowing to fight against Donald Trump’s Supreme Court picks.

The hypocrisy is just staggering. McConnell and his cronies have refused to even meet with President Obama’s Supreme Court nominee, Merrick Garland, on the basis of who nominated him. The Republicans have left the highest court in the land deadlocked with an even number of judges for the greater part of a year and they now have the sheer nerve to complain about Democrats moving to block Trump’s nomination, which he shouldn’t get to make in the first place because the Republican Party spat in the face of their constitutional duty to vote on nominees.

McConnel’s entire argument for the unprecedented refusal to even meet with nominee Merrick Garland is based on the false notion that President Obama is a “lame duck” (which he isn’t) and that the “American people” should have a say in the appointment by allowing the next president to fill the vacancy – even though according to multiple polls, a significant majority of the American people wanted him to do his damn job and fill the seat last year. McConnell even admitted that if Clinton had won the election, he still wouldn’t have voted to confirm ANY Democratic nominee.

So it is rightfully so that the Twittersphere erupted in fury at McConnell’s outrageous hypocrisy.

The Hate continued exactly as before, except that the target had been changed.