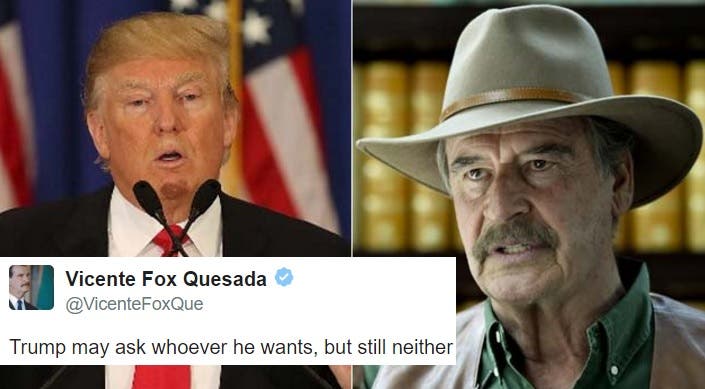 Trump Just Stiffed His Trump Hotel Builders Out Of $5 Million

Former Mexican President Vincente Fox has emerged as a leading critic to the Republican President-elect’s ludicrous plans to build a wall on America’s southern border and called Trump’s plan force our neighbors to pay for that wall as, “another promise he can’t keep.”

House Republicans have since announced that the only “Mexicans” who will be paying for Trump’s wall will be the ones in New Mexico and in the town of Mexico, New York, because the American people are going to have to fit the bill, which could be as high as $40 billion.

Fox’s response on Twitter was incredible, because the former Mexican President put his finger right on the actual reason why The Donald convinced his fellow Republicans on building “that wall” in this year’s election is a good idea:

Trump may ask whoever he wants, but still neither myself nor Mexico are going to pay for his racist monument.
Another promise he can't keep.

TRUMP, when will you understand that I am not paying for that fucken wall. Be clear with US tax payers. They will pay for it.

Republicans have made racism a pillar of their 2016 party platform, but sadly there’s not a lot of political figures willing to call Trump’s spade a spade on the issue.

Vincente Fox has been one of the President-elect’s staunchest critics, recently comparing the Republican President to Fidel Castro because he says that both men, “lie, they cheat, they’re false profits, they promise many things and they’re not going to be able to comply [with those promises].”

Shortly after the election, Fox said that Trump was an “illegitimate President” for having lost the popular vote by a wide margin and that Mexico would defend their people “wherever they are,” which is backed up by recent policy changes to make a diplomatic offensive at their 50 consulates spread across 25 states.

Mexico’s Senate is still debating the law introduced by Sen. Rios Piter which will outlaw paying for Trump’s wall, which would also include reciprocity if the future President unilaterally breaches the NAFTA trade agreement. Asked for comment, Sen. Rios’ aides said that once the Mexican Senate reconvenes a vote on the legislation is upcoming, and that he has issued a formal invitation to meet to Republican Speaker of the House Paul Ryan to discuss “sustainable solutions.”

America and Mexico have extremely close trade and cultural ties, but Trump’s racism and know-nothing politics is threatening to break one of the most important mutually beneficial relationships that our country has come to take for granted after decades of success and commerce.