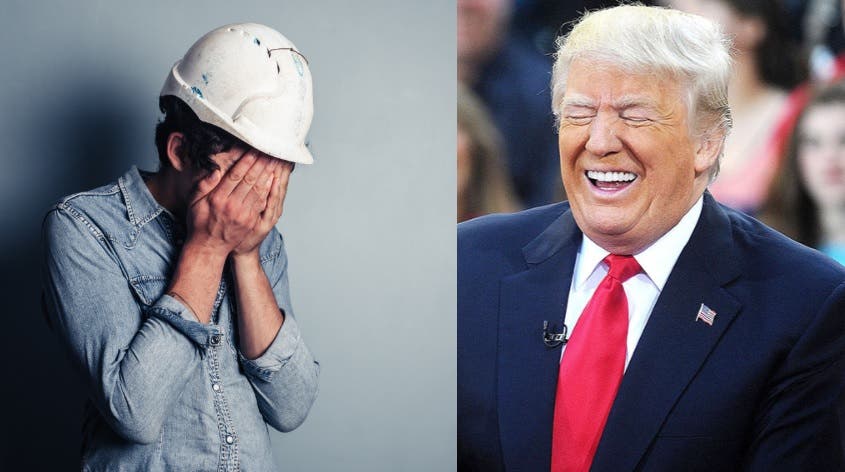 Donald Trump’s pride and joy, his brand-new Trump Hotel in Washington D.C., is a towering symbol of how Trump panders to the rich and the famous while screwing over the working men and women of America.

Members of the IBEW Local 26 electrical union under contract to AES Electric toiled for 50 days of 12-hour shifts to get the hotel ready as fast as possible for the September 16th opening, on Trump’s orders. “We had people there well over 12 hours a day for weeks because they had a hard opening of Sept. 12 and you can’t open if the lights don’t work and the fire alarms don’t work and the fire marshal can’t inspect it. There is a lot of work that went into that hotel, and it didn’t happen by accident” said AES executive vice president Tim Miller.

On September 16th, Trump held a press conference at the hotel ostensibly to put the “birther” issue to rest; instead he blamed Hillary Clinton for Trump’s accusations that President Obama is a secret Kenyan-born Muslim, while the media quickly figured out the entire affair was just an excuse to plug his hotel.

But it was around that date that the Trump Organzation decided to stop paying the workers that had slaved away to get his outrageously tacky hotel ready in time.

Three days before Christmas, AES filed a mechanic’s lien with the D.C. government alleging that it was out almost $2.1 million. “Merry Christmas and a happy new year to us,” Miller said.  The AES filing brings the total of allegedly unpaid bills on the hotel to more than $5 million. Washington-area plumbing firm Joseph J. Magnolia Inc. and Northern Virginia construction company, A&D Construction, are seeking $2.98 million and $79,700 respectively.

“We’re not in this for any sort of political reasons,” Miller said. “We have no ax to grind, political or otherwise. We’re a business. We have 700 employees that we pay every week. We have bills. We are effectively financing this work, and we don’t think it’s right. That’s really it.”

Unfortunately for Miller, this is just the latest in a long history of Donald Trump screwing the people he hired out of the money he rightfully owes them.

Trump openly flaunts his wealth while refusing to pay contracted workers their wages. These flagrant violations of the law and of workers’ rights has resulted in over 200 legal claims filed for unpaid invoices. Trump has stolen from, among others, “a dishwasher in Florida. A glass company in New Jersey. A carpet company. A plumber. Painters. Forty-eight waiters. Dozens of bartenders and other hourly workers.”

While Trump is busy cheating the working man out of their hard earned dollars, Trump’s hotel is a desperate and ill-executed attempt to tempt the refined sensibilities of the rich and famous. The hotel rooms start at around $700 a night. The Washington Post‘s Dana Millbank rented a room for one night, and his experience speaks for itself:

He campaigns on an “America First” theme — yet about the only American-made thing I could find in my hotel room was the small package of milk-chocolate Trump gold bullion ($25).

He portrays himself as a populist friend of the little guy, yet he makes money renting out a presidential suite for $18,000 a night (a sign informed me that the maximum nightly rate for my room was $5,600).

He derides the “establishment” but makes his living catering to it. The hotel lobby features a Brioni boutique and 3-foot-tall bottles of Veuve Clicquot sharing a bar top with Dom Pérignon; the room comes with a copy of Wine Spectator (“The Cheese Issue”); the hotel charges $15 to launder a shirt, $12 for Peanut M&Ms and $26 for a hamburger (sorry, no taco bowls).

Trump is a liar and a hypocrite of the lowest, most despicable kind. He spends his days pretending to create jobs and taking credit for the decisions of actually competent businessmen while refusing to pay the workers that he himself hires. He brags about how rich he is but accepts a $40 million taxpayer credit for the hotel construction. He pretends to be “for the little guy” but obsesses over the refusal of celebrities to attend his inauguration and hires billionaires to staff his administration. He’s a charlatan and a fraud and it is mind boggling that so many Americans fell for his bullshit economic populism routine.