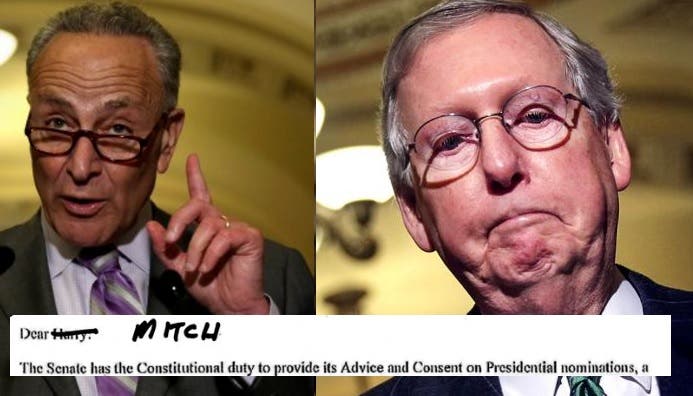 The stunning hypocrisy of Senate Majority Leader Mitch McConnell (R-KY) is coming back to haunt him as he attempts to push President-elect Donald Trump’s cabinet nominations through the Senate vetting process.

At issue is the urgency on the part of Republicans who seek to have as many of Trump’s nominees confirmed before the finances of the nominees have been properly investigated and their connections to multinational corporations revealed for the nation to see. McConnell says this is perfectly acceptable and that Democrats are poor sports who need to grow up:

So all of these little procedural complaints are related to their frustration at having not only lost the White House, but having lost the Senate. I understand that. But we need to, sort of, grow up here and get past that.

The director of the Office of Government Ethics, Walter M. Shaub Jr., which oversees the nominee vetting process, said Republicans were putting “undue pressure” on the office.

However, Senate Minority Leader Chuck Schumer (D-NY) is literally taking a play out of McConnell’s book. Schumer reminded everyone that:

In 2009, then-Minority Leader McConnell sent then-Majority Leader Reid a letter laying out his list of pre-requisites for time agreements on the floor for President Obama’s nominees. They are almost exactly what Democrats have requested.

Schumer then, in a bout of hilarious irony, sent McConnell back his own letter from 2009. The only difference is Schumer crossed out McConnell’s name and and wrote in his own:

Our requests are eminently reasonable, shared by leaders of both parties. I’ll return this letter to @SenateMajLdr with the same requests. pic.twitter.com/IMT7ZtJFjV

As Republicans are a shameless breed, the standards which they demanded 8 years ago will no longer apply. Their contortions and justifications for pushing through nominees, to which they would have cried endless foul had such a procedure been forced upon them, are not based on fairness or logic. Republicans have spent the last 8 years obstructing President Barack Obama at every turn, and now McConnell has the gall to tell Democrats to grow up? The worst part is 50% of the voting public has too short of an attention span to remember the past Republican antics.

This behavior is what the American people have to look forward as Republicans control both the House of Representatives and the Senate — at a minimum of the next two years.