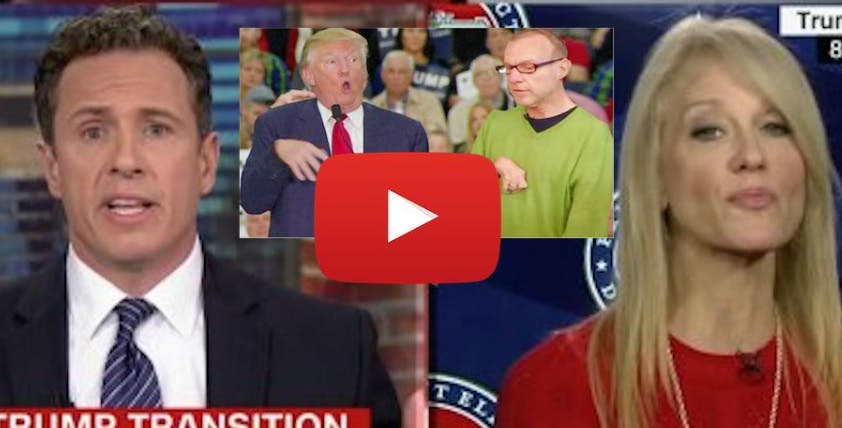 Twitter Is ROASTING Trump For His Childish Attack On Meryl Streep

Kellyanne Conway, former Donald Trump campaign manager and incoming counselor to the president, has just given the worst possible defense of her boss’s mocking of a disabled reporter. She claims that the American public should not listen to “what comes out of [Trump’s] mouth,” but instead we should all use psychic powers and judge “what’s in his heart.”

In a South Carolina campaign rally, Trump cruelly imitated New York Times reporter Serge Kovaleski, who was covering the event and has visibly impaired joints. Trump singled out Kovaleski and said, “You’ve got to see this guy!” and then started spastically flailing his arms in a crude imitation of Kovaleski’s poor mobility. He adopted a grotesque panicked expression and stammered incoherently, playing into the stereotype that physical disabilities indicate lower cognitive capacities. Kovaleski is, of course, a highly intelligent, accomplished reporter.

Conway fought with CNN’s Chris Cuomo this morning, attempting to gaslight the American people into not believing what they saw with their own eyes: a cruel, hateful, stigmatizing display. Trump denied that his gestures were mocking Kovaleski, and Conway thinks that we should just believe that. She says that Trump is not given the benefit of the doubt afforded to other politicians. Cuomo retaliated saying that Trump has forfeited any right to the benefit of the doubt in this situation, “because he’s making a disgusting gesture on video. … a gesture that is so keenly tuned to what Serge’s vulnerability is.”

Conway responded with one of her most absurd statements yet:

“You have to listen to what the president-elect has said about that. Why don’t you believe him? Why is everything taken at face value? You can’t give him the benefit of the doubt on this and he’s telling you what was in his heart? You always want to go by what’s come out of his mouth rather than look at what’s in his heart.”

That absurdity of this statement is simply mind-blowing. Since we are not psychics, we are going to judge our president-elect on the basis of what he says and does in public. We will take his actions, caught on video, at face value. Post hoc denials are worse even than a false apology, and we will not tolerate them.

We’ve stopped giving Trump the benefit of the doubt a long, long time ago. Before he mocked a disabled reporter. Before he attacked a Gold Star family whose son died saving American lives. Before he insulted a former Miss Universe contestant. Before he smeared and publicly shamed all his sexual assault victims.
Trump needs to take responsibility for his despicable actions. We must hold him to account and defend the integrity of all Americans, including the disabled.