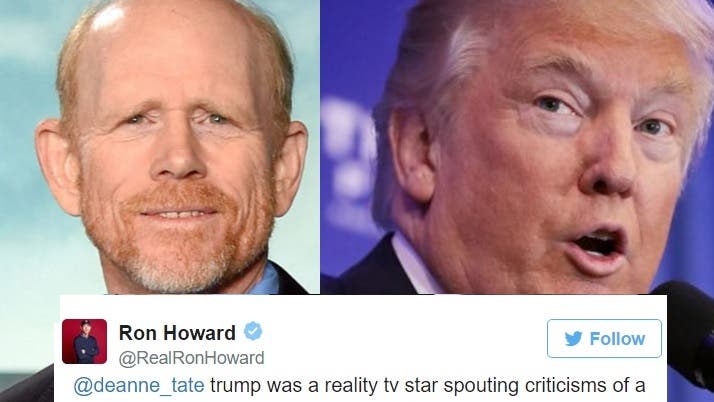 Trump Says DC Is Sold Out Of Dresses For His Inauguration. Dress Sellers Respond…

Famed director Ron Howard of Arrested Development fame spoke out in defense of Meryl Streep today, calling out president-elect Donald Trump as a hypocrite and for not taking his office seriously.

Taking to Twitter, Howard noted that Trump has been very vocal about criticizing anyone and everyone when he feels like it, using his celebrity as justification for why his rude opinions should be taken seriously.

Trump takes the bait & calls #MerylStreep overrated?! Please Pres-Elect. Don't make this into the WWF which is fun but not presidential

trump used his fame to speak out on issues years before he ran 4 office. why was he allowed & Ms Streep should keep quiet? no hypocrisy pls https://t.co/CrpSCREcrw

Making the poor decision to respond to an egg-account Trump fan who is most likely a paid troll in a St. Petersberg basement, Howard nevertheless made an excellent point by reminding us just how unqualified Donald Trump is to be our president and highlighting the fundamenetal rottenness of Donald Trump’s heart.

trump was a reality tv star spouting criticisms of a president & reinforcing the Birther Lie. but now celebs should b muzzled?

Meryl Streep was given a platform and a voice from her celebrity – and she used it to call for unity, for respect for our fellow humans and for an end to violence in word and deed.

Donald Trump was given a platform from his celebrity, and he used it to insult women, take cheap potshots, and to perpetuate a disgracefully racist conspiracy theory undermining the legitimacy of one of the greatest presidents our nation has ever seen.

The difference couldn’t be clearer.