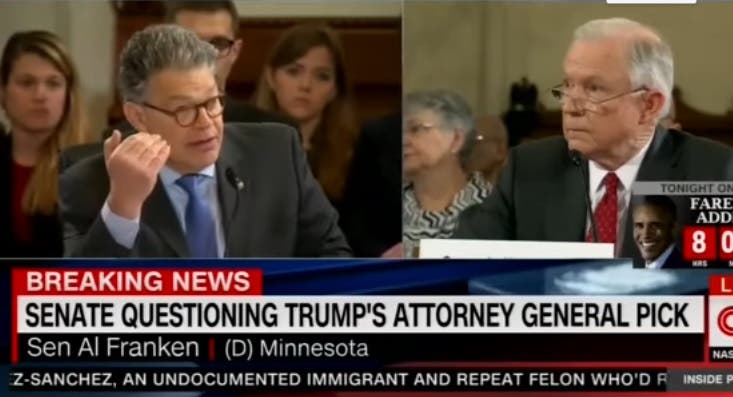 Senator Jeff Sessions (R-AL) has been spending his confirmation hearing for the position of Attorney General in the Trump Administration trying to dodge the fact that in 1986 a Republican Congress deemed him too racist to be a federal judge. Senator Al Franken (D-MN) did not let him get away with it. He trapped Sessions in his web of lies, forcing the humiliated Sessions to admit that as a U.S. Attorney he did nothing to advance civil rights or desegregate his home state of Alabama (transcript and video below).

Franken followed up on on revelations from attorney Joe D. Rich that came to light in the last week. Rich worked on a civil rights case during Session’s time as U.S. Attorney that Sessions is now trying to steal credit for. In a pre-confirmation hearing document, Sessions listed Rich’s case as one of the ten “most significant litigated matters” that he (Sessions) personally handled during his career. Rich called him out on his lie during an interview with ThinkProgress.

“[Sessions] never provided any advice or guidance to me. His name wasn’t even on the brief that I filed in 1985, the brief that was related to the decision he was claiming credit for in 1986. … It seems like, if you’re nominated to be a cabinet member, particularly the Attorney General, you ought to be telling the true story. That’s why we wrote the op-ed — this was not a true statement. I think he’s trying to paint a picture that he was a vigorous enforcer of the civil rights laws by saying this, and that’s not true. At the same time, he didn’t try to interfere, he didn’t try to stop us. But that he’s trying to claim something he didn’t do is a problem in my eyes.”

But Sessions lies go beyond his claim to Rich’s case. Sessions says he has filed dozens of civil rights cases and voting rights cases. He did nothing to end segregation or ensure fair voting rights. Franken exposed his desperate attempt to hide racism that was publicly exposed decades ago:

Franken: Now, in that same interview you said, “I filed 20 or 30 civil rights cases to desegregate schools and political organizations and county commissions when I was United States attorney.” So 20 or 30 desegregation cases. Did I misread that quote?

Sessions: I believe that’s what I have been quoted as saying. I suspect I said that.

Franken: Okay. Now, that was 2009. In November — your office said when Senator Sessions was U.S. Attorney he filed a number of desegregation lawsuits in Alabama. Not 20 or 30 this time, but a number. Tell me, did you file 20 or 30 desegregation cases, or is it some other number?

Sessions: Well, thank you, Senator Franken. It is important, first, to be accurate. The records don’t show that there were 20 or 30 actually filed cases. Some of the cases involve multiple defendants and multiple parties like to a school board and a county commission being sued for racial discrimination or things of that nature, but the number would be less than that, as we’ve looked at.

Franken: What do you think would have caused you to say —

Franken: –That you filed 20 or 30 desegregation

Franken: You originally said you personally handled three of these cases, but these lawyers say that you had no substantive involvement. Chairman Grassley, I would ask that that op-ed from last Tuesday’s Washington Post be entered into the record. Without objection, it will be entered. Are they distorting your record here?

Sessions: Yes. In fact, one of the writers there, Mr. Hebert, spent a good bit of time in my office. He said I supported him in all the cases he brought, that I was more supportive than almost any other U.S. Attorney, and that I provided office space, I signed the complaints that he brought, and as you know, may know, Senator Franken, when a lawyer signs a complaint, he is required to affirm that he believes in that complaint and supports that complaint and supports that legal action, which I did. We sued —

Franken: So that’s your personal involvement was that your name was on it?

I want to get through this here. On the docket sheet, my name is listed, number one. As attorney for the case? I’m not a lawyer. I’m one of the few members of this committee that didn’t get to law school, and usually I get by just fine, but it seems to me a lawyer — if a lawyer has just his name added to a document, he — that lawyer would be misrepresenting his record if he said he was personally handled these cases.

Two of the lawyers who wrote the op-ed have also submitted testimony for today’s hearing. Mr. Jerry Herbert and Mr. Joe Rich. Mr. Hebert said he litigated two of the four cases you listed. He said I can state with absolute certainty that Mr. Sessions did not participate personally in either. Mr. Rich worked on one of the four cases you listed. He said, “I never met him at that time nor any other time, and he had no input to the case.” These represent three of the four cases that you claimed that were among the top ten cases that you personally handled. Now, in your 1986 questionnaire, you used phrases like “I prepared and tried the case as sole county.” “I was a lead prosecutor on this case assisted by so and so.” Why didn’t you use the same level of detail in your 2016 questionnaire?

Sessions: I don’t know, Mr. Rich. Perhaps he handled a case that I never worked with. He goes on to say —

Franken:  One of the cases —

Sessions: No, you raised this question.

Franken: One of the cases that you listed was a case that Mr. Rich handled. If you don’t know him, it’s hard for me to believe that you personally handled it.

We can only hope that Franken’s incisive questioning will sway members of the Senate to reject Sessions as future Attorney General. A man with a documented history of disqualifying racism, who dares to lie to the country to pretend he is a civil rights hero, has no place in our government. An Attorney General should be honest and committed to ensuring the equality of all American citizens. Thanks to Franken, it is clear that Sessions is neither of those things.