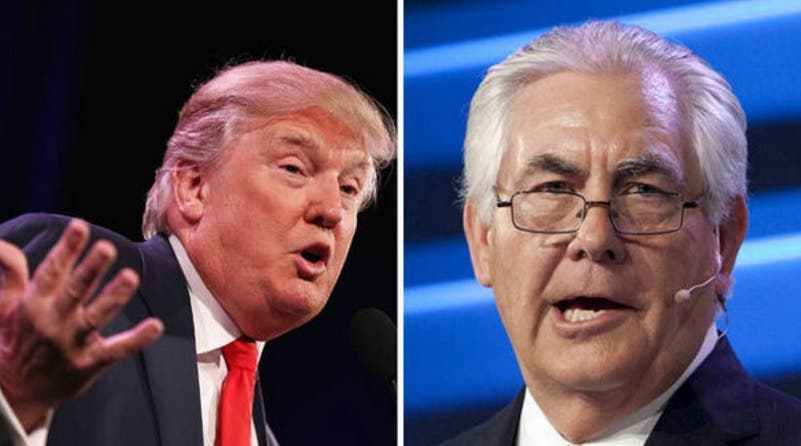 Newly discovered SEC filings show that Trump’s Secretary of State nominee Rex Tillerson did business with three state sponsors of terrorism in the early 2000s in violation of US government sanctions as the senior executive and as chairman and CEO of ExxonMobil. As USA Today reports, Tillerson’s company provoked an SEC action by keeping their shareholders completely in the dark about the company’s deals with states who sponsor terrorists.

ExxonMobil did business with Iran, Syria and Sudan through a European subsidiary while President-elect Donald Trump’s nominee for secretary of State was a top executive of the oil giant and those countries were under U.S. sanctions as state sponsors of terrorism, Securities and Exchange Commission filings show.

The sales were conducted in 2003, 2004 and 2005 by Infineum, in which ExxonMobil owned a 50% share, according to SEC documents unearthed by American Bridge, a Democratic research group.The filings, from 2006, show that the company had $53.2 million in sales to Iran, $600,000 in sales to Sudan and $1.1 million in sales to Syria during those three years.

The SEC complained to ExxonMobil about its failure to disclose their extensive business in countries sponsoring terrorism because of “the potential impact of corporate activities upon a company`s reputation and share value.”  ExxonMobile’s lawyers responded by claiming that the small size of the transactions compared to their massive global income should mean that it’s ok to do business with state sponsors of terror.

Compared to Exxon’s overall annual revenue of $371 billion, “these transactions are not material by any reasonable measure,” Richard Gutman, ExxonMobil’s assistant general counsel at the time, wrote in response to an SEC inquiry regarding the transactions. He did not address the SEC’s concerns about the impact on the oil company’s reputation. “These are all legal activities complying with the sanctions at the time,” Alan Jeffers, media manager at ExxonMobil, told USA TODAY. “We didn’t feel they were material because of the size of the transactions.”

Experts say that American companies did engage in some of these questionable dealings and through ExxonMobil’s use of numerous loopholes, the deals were legal at the time. But later on, Congress shut down the loopholes when stronger sanctions against Iran were implemented by the Obama Administration.

Republicans are in a rush to hold confirmation hearings on Trump’s group of oligarch nominees just to avoid a public conversation of these sorts of issues and more. Until we see Rex Tillerson’s tax returns and ethics statements, we can’t know what other international ventures or businesses he’s involved in, but The Guardian already found him serving on the board of a US-Russian oil firm registered off-shore in the Bahamas.

The Democratic Coalition uncovered an offshore company in Cyprus called Tillerson Holdings, which Russian media reports was partially sold to a public company called RTM. The only reason that company was discovered is that RTM is a publicly traded company, and Tillerson Holdings turned up in their audit. Cyprus is notorious as a money laundering jurisdiction for Russian oligarchs and Putin himself, and Donald Trump himself owns two companies on the island.

Rex Tillerson is a dubious choice for Secretary of State based alone on his very public, very chummy relationship with Vladimir Putin. Just last week, Tillerson convinced his company ExxonMobil to advance $180 million dollars (after taxes) in deferred compensation they owe him. The maneuver allows Tillerson to delay paying $71 million dollars in taxes and only happened because ExxonMobil’s Board of Directors voted to give him a special exception they promised shareholders that they’d never give, even to the CEO: a big cash payout on departure or golden parachute.

Senate Republicans big rush to confirm Rex Tillerson as America’s next Secretary of State is an irresponsible way to provide oversight of the executive branch, especially because of the former ExxonMobil CEO’s extensive foreign entanglements, not to mention his excessively close relationship with Vladimir Putin – which should disqualify him from the start – and his willingness to do business with state sponsors of terrorism and hide it from his shareholders.