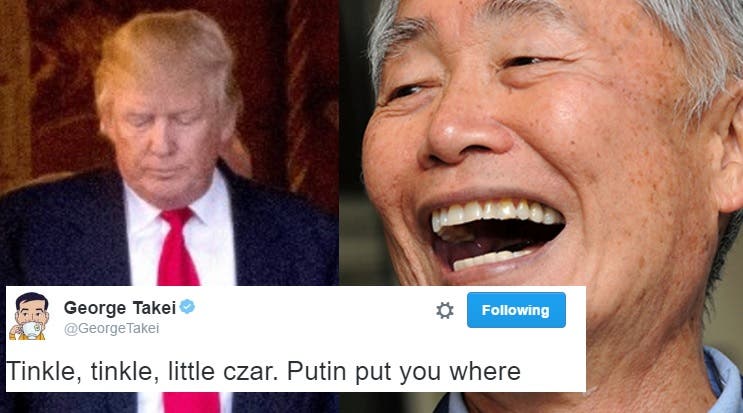 Earlier tonight, some extremely disturbing but unconfirmed reports about just what “compromising information” the Russian FSB may be blackmailing President-elect Donald Trump hit the internet. Among the allegations include a report that Trump may have paid prostitutes to urinate on a bed once slept in by President Obama at the Ritz-Carlton in Moscow, which was filmed by Russian security agents.

I wonder if Trump's press conference tomorrow will have a live stream.

You know, Trump never could pass up a golden opportunity.

Is it a tad immature to keep cracking jokes at Trump’s expense? Perhaps. But after a year of listening to that hateful windbag spread conspiracy theories that insulted and delegitimized President Obama on just the basis of his skin color, I find it difficult to give him the benefit of the doubt.

After listening to him complain about Hillary Clinton’s email server, and about the Benghazi attacks, and about how thousands of Muslims were cheering for 9/11 on the rooftops, about how millions of people filed fake votes during the election, and how he insulted and demeaned and blamed his sexual assault victims for his atrocious behavior, how Antonin Scalia was murdered by liberals, how Vince Foster was murdered by the Clintons, how Ted Cruz’s dad killed JFK, how just today he met with an anti-vaccination conspiracy theorist…I think it’s far about time we begin giving some allegations that sound VERY much like a vindictive and vengeful but extremely uncreative sociopath like Donald Trump would do a little benefit of the doubt.

The conspiracy theories that Trump spread are damaging to many people who don’t deserve it, and some of them call into question the integrity of our democratic system. These are very dangerous lies. These allegations only hurt a man who deserves so much worse.

After all, Trump has a long history of sexual misconduct and is a known pathological liar, while this report was deemed credible enough to be given to the President. And true or not, what is true is that our current president was informed today that Russian agents have compromising information on him, and if he is being blackmailed by the Russians, that is an extremely serious matter that demands Congressional investigation immediately.