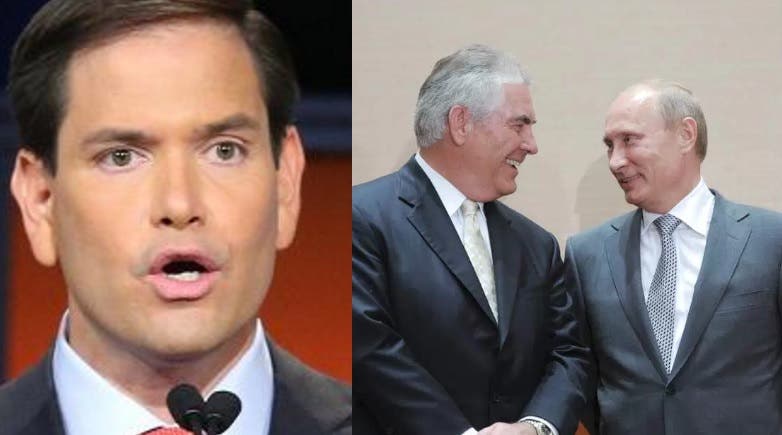 Senator Marco Rubio (R-FL) has become an unlikely ally in the fight to stop incoming president Donald Trump’s corrupt nominee for Secretary of State from being confirmed. Rex Tillerson is the chairman and chief executive of oil giant ExxonMobil and has personally struck deals with Russian autocrat Vladimir Putin, fought anti-Russia sanctions, and worked with Russia to drill in the Arctic Circle despite fears of a devastating environmental effect. As the (potential) future Secretary of State, Tillerson refuses to denounce the numerous war crimes that have been committed under President Putin’s command.

Rubio called out Tillerson on his appalling stance that denigrates the system of international law that the United States helped build. Rubio asked Tillerson whether he would call Putin a “war criminal.”

Tillerson replied, “I would not use that term.” Rubio was visibly furious when he decried Tillerson’s refusal to face the facts: “It should not be hard to say Vladimir Putin’s army has committed war crimes in Aleppo.” Tillerson, who apparently is either unwilling to face facts that make his Russian buddies look bad or completely ignorant about the state of the world, said, “I look forward to being fully informed [when in office].”

Rubio refused to back down and called him out on his corruption: “None of this classified. These people are dead!” Rubio sees what the world has seen; Putin has led a horrific campaign in Syria, deliberately destroying hospitals and murdering women and children along with civilian men – more civilians than even the nihilistic monsters of Daesh (ISIS/ISIL) have killed. Tillerson’s callous disregard for the human cost of Putin’s authoritarianism and the war crimes that Human Rights Watch has clearly documented is chilling.

Syria is not the only instance of Putin’s brutality and casual flouting of international law. In the Second Chechen War, Putin’s troops committed a series of heinous crimes, including rape, torture, and beheadings. Tillerson’s judgment of Russia is clearly compromised, and the Senate must come together to reject this inhuman Russian puppet. The future of America’s integrity and American values is in grave danger.