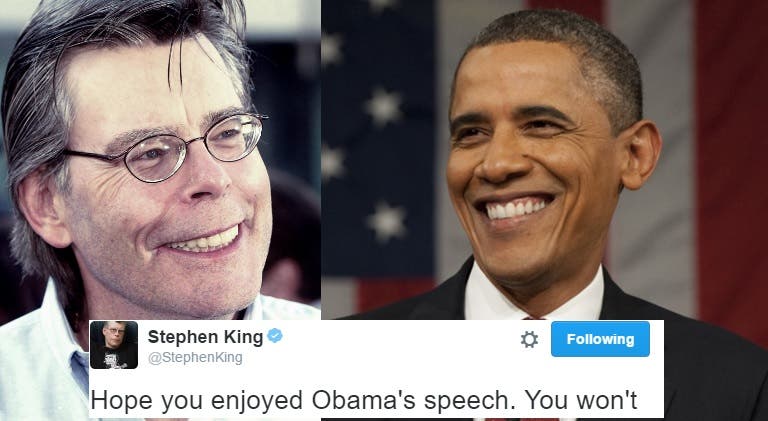 Renowned author Stephen King has taken a break from taking down incoming president Donald Trump to honor the outgoing President Obama. Last night, Obama gave his farewell address to the nation, reminding America that change is not always linear and democracy is never perfect. He called on us, as ordinary citizens, to unite around American values and keep fighting for change. King praised Obama on Twitter with one succinct tweet that sums up the president that Obama has been for our great nation:

Hope you enjoyed Obama’s speech. You won’t hear anything so cogent and kind for a long time. So, with complete sincerity: THANKS, OBAMA.

The next four years will not be filled inspiring speeches that empower ordinary Americans to enact change and make their country a better place. We can look forward to hearing Trump’s personal brags, mostly in incomplete sentences. When Trump speaks he lies, he cannot avoid mentioning his own personal “successes,” he goes back on his word time and again, he deceives the America people with outrageous rhetoric that is constantly shifting so we never know what to expect. Trump does not speak as a leader, he speaks as a reckless, power-hungry narcissist who gets perverse enjoyment out of stringing the public along.

We will miss President Obama’s class, eloquence, and intelligent leadership. He led us out of the Great Recession and into prosperity. He gave us all access to healthcare and ensured the rights and dignity of minorities, including undocumented migrants and LGBTQ Americans. He fought for the working class and the poor, and he fought endlessly against climate change.

Along with Stephen King, we can sincerely say: THANKS, OBAMA.