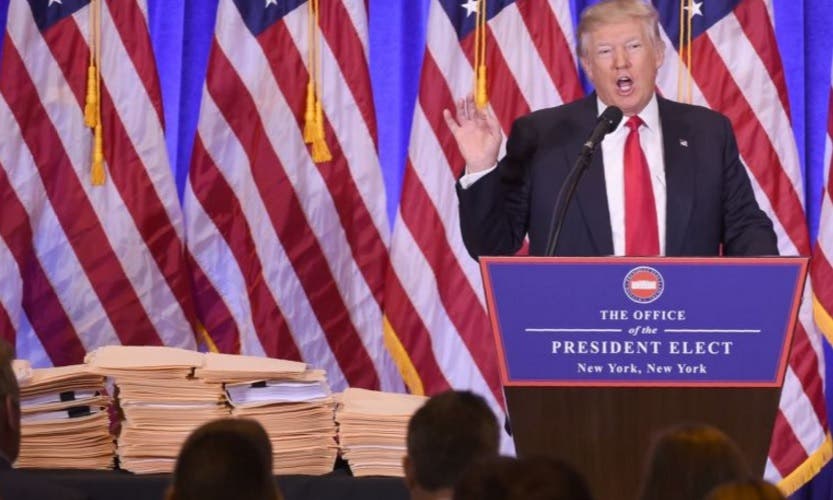 Donald Trump finally held his first press conference since his infamous cry for help from Putin to hack the election back in July, and the top item of business for this press conference was hearing out the President-elect’s plan for resolving Trump Organization’s global conflicts of interest before he takes office. The Republican President-elect’s answers show that he has absolutely no plan to divest in his global businesses whatsoever.

Attorneys Richard W. Painter and Norm Eisen (White House Ethics Counsel to the last two Presidents) and Harvard Law Professor Lawrence H. Tribe published “5 Ways You’ll Know if Trump Is Playing by the Rules” yesterday in Politico. Those three widely recognized presidential ethics experts distilled five key questions from their numerous reports, letters, and recently published works. We’ll go through the lawyers’ questions and give you answers from NPR’s annotated transcript to each one, and a news analysis if the answer satisfies their criteria to avoid scandal and corruption and why. The only correct answers to these questions would be all “yes” answers, but President-elect Trump through his lawyer answered “no” to all five.

1. Does Trump make a clean break from ownership of his businesses, not just from operations?

The Answer: No. Trump’s lawyer Sheri Dillon, “President-Elect Trump will resign from all officer and other positions he holds with the Trump organization entities. Some have asked questions. Why not divest? Why not just sell everything?”

The Explanation: Indeed, why not? Divestment is the only option to satisfy every ethics lawyer’s advice to navigate the numerous ethical and legal quandaries of owning the Trump Organization while attempting to serve as President. Trump’s attorney disseminated a major red herring in her following answer by claiming that ongoing royalty payments would create an even greater conflict, which she gave away by saying that, “If President-elect Trump sold his brand, he will be entitled to royalties for the use of it.”

Selling the Trump brand outright would involve a one-time fee and exit from his ownership of the family name brand. Furthermore, her quote actually is the only time in the one-hour press conference that the word divest was even mentioned. Mrs. Dillon just described selling Trump’s name in the way which he has been doing for years, through licensing agreements with continuing payments. Trump’s vaunted brand creates the most ethical quandaries for holding the office of the presidency since its value is abstract, it opens the door to all manner of unconstitutional payments called emoluments, which we will delve deeper into below.

2. Does Trump divest into a true blind trust?

The Answer: No. Trump’s lawyer Mrs. Dillon: “The trust will have two types of assets — first, will hold liquid assets — cash, cash equivalents and Treasuries and perhaps some position in a government approved diversified portfolio, one that is consistent with regulations from the Office of Government Ethics.”

“Second, the trust is going to hold his preexisting, illiquid but very valuable business assets, the ones that everyone here is familiar with; Trump owned, operated and branded golf clubs, commercial rental property, resorts, hotels, rights to royalties from pre- existing licenses of  Trump marks, productions, and goods.  Things like Trump Tower, Mar A Lago, all of his other business assets, 40 Wall Street, will all be in the trust.”

The Explanation: Trusts are legal entities like corporations, but instead of shareholders the person who owns the trust is a beneficiary. In a real blind trust, the beneficiary doesn’t know what assets the trust owns. Trump’s second type of assets are wholly known, so the trust as described would not be blind. Even Mrs. Dillon eventually conceded saying, “you cannot have a totally blind trust with operating businesses.”

3. Does Trump use a truly independent trustee, not a family member?

The Answer: No. Trump’s lawyer Mrs. Dillon: “Through the trust agreement, he has relinquished leadership and management of the Trump organization to his sons Don and Eric and longtime Trump executive, Alan Weisselberg.”

The Explanation: Mrs. Dillon says that Don Jr. and Eric Trump – the President-elect’s sons – will be placed in command of the business.

4. Are all Emoluments Clause issues resolved?

The Answer: No. Trump’s lawyer Mrs. Dillon: “Paying for a hotel room is not a gift or a present, and has nothing to do with an office. It is not an emolument. So President-elect Trump has decided — and we are announcing today — that he is going to voluntarily donate all profits from foreign government payments made to his hotels to the United States Treasury.”

The Explanation: Firstly, there’s no way to really verify that the Trump Organization would actually do this, and frankly the idea that this could be verified is ludicrous. Second, that fails to address the many other businesses which the President-elect owns which could be susceptible to accepting foreign payments. Thirdly, it’s not binding or by contract, but yet another Trump promise which nobody should accept at face value from a man notorious for violating actual written contracts. Lastly, even donating profits from foreign payments is still an emolument!

Just look at the definition of emoluments in Black’s Law Dictionary when evaluating the meaning of an emolument. It means all payments: “The profit arising from office or employment; that which is received as a compensation for services, or which is annexed to the possession of office a salary, fees, and perquisites; advantage; gain, public or private.” The founding fathers placed the broadest possible restriction on the President from obtaining any form of payments whatsoever while in office. Notably, Mr. Eisen said on MSNBC after the press conference that every State Attorney General has standing to sue under the constitution’s emoluments clause.

5. Is a strong ethics wall put in place for both the administration and the business?

The Explanation: Donald Trump has had over two months to find this ethics advisor, and delayed today’s press conference alone for over one month, but still hasn’t located this mysterious ethics advisor. For all we know this could mean that Rudy Giuliani or Chris Christie is later appointed to advise the Trump Organization on ethics. The empty promise of a top ethics advisor to be named later is more troubling in light of recent reports that Donald J. Trump Jr. has held secret meetings with Russian officials overseas recently, and newly leaked images from #TrumpLeaks proved this week that he was the Keynote Speaker in Russia’s largest real estate conference in 2008 along with two major Putin allies.