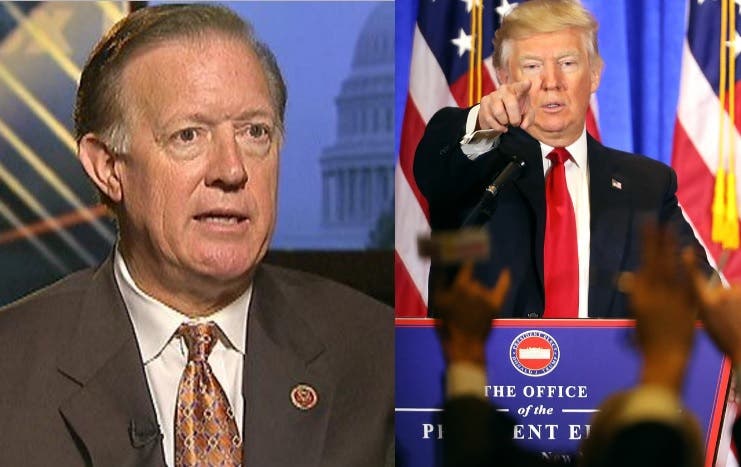 If anyone needed more proof that the Republican worldview is entirely antithetical to reality, Rep. Randy Weber (R-TX) has provided it by calling for CNN reporter Jim Acosta to be “fired and prohibited” from further press conferences after his confrontation with Trump on Wednesday.

In a tweet today Weber claimed Acosta was “disrespectful to Trump,” as if Acosta’s doing his journalistic duty and pressing for answers is disrespectful. Indeed if anyone should be apologizing it is Trump himself. Not only was he tremendously rude to Acosta, but he is once again hiding behind a dangerous anti-intellectual conspiracy theory in order to avoid answering tough questions.

The CNN reporter who was disruptive to the press briefing, & disrespectful to Trump-should be fired & prohibited from any press briefings.

The altercation between Trump and Acosta, which came during Trump’s first press conference in weeks, was a result of CNN’s recent reporting on unverified allegations of damning ties between Trump and the Kremlin that were compiled in a dossier by a former British intelligence agent.

Specifically, the dossier charges that Trump’s campaign had direct contact and coordinated with the Kremlin during the campaign and that Russian intelligence is blackmailing Trump with a sex tape recorded in a Moscow hotel room. While American intelligence agents have been unable to independently verify the claims, they were viewed as credible enough to be presented in the president’s daily brief and even to Trump himself. If true the charges would confirm what so far has only been hinted at: that Trump is working at least in part on behalf of the brutal autocrats in Moscow.

The gravity of that possibility would suggest that the allegations should be taken as seriously as possible, which is why CNN and other news sources have chosen to publish them. Nonetheless there has been tremendous criticism of CNN and BuzzFeed – which broke the story originally – for supposedly publishing unverified information, despite both sources having made it abundantly clear that the allegations were unverified. Somehow the difference between presenting unconfirmed allegations as true and reporting the existence of unverified allegations – which shouldn’t be a difficult distinction – has been lost on much of the country. Which brings us to Trump’s news conference.

After Trump went on one of his characteristic anti-media tangents that included calling BuzzFeed a “failing piece of garbage” and comparing CNN to “Nazi Germany” for its “fake news,” Acosta calmly asked for a chance to reply on behalf of CNN. Trump replied in a rude and derisive tone, “No! Not you! Your organization is terrible” and proceeded to the next question. Acosta continued to press Trump for a chance to question him, saying, “You’re attacking our news organization, can you give us a chance to ask a question sir?” to which Trump responded angrily “Don’t be rude. I’m not going to give you a question. You’re fake news.” At that point Sean Spicer, the incoming White House press secretary, attempted to remove Acosta from the press conference for questioning the supreme leader’s infinite wisdom.

That Rep. Weber or anyone else thinks Trump is the one who deserves an apology when he was not only the rude and obnoxious voice in the altercation but also clearly behaving like a dictator is a testament to the tremendous delusion of most pro-Trump Republicans. Dismissing news organizations that report damaging information as terrible and biased is one of the hallmarks of despotism and totally antithetical to the democratic tradition of journalism. Trump’s slandering CNN as “fake news” when the phenomenon of fake news is in fact confined largely to Trump’s own neo-fascist supporters is an example of another classic Republican/dictator move: throwing your opponents’ legitimate criticisms back in their face with no evidence.

And what’s worse is many people will take him at his word because journalists are too constrained by false equivalency to treat Trump with the aggressive questioning he deserves. While Trump himself is likely simply manipulating his supporters like any good populist, many of his supporters seem genuinely unable to wrap their heads around the fact that a news organization’s reporting of an opinion someone holds is not an endorsement of that opinion. It’s a concept that would be quite simple were it not for the rampant anti-intellectualism that is destroying this country and that got Trump elected in the first place. If anyone should be apologizing it should be Trump, not just to Acosta but to the entire journalistic profession and indeed the country itself.