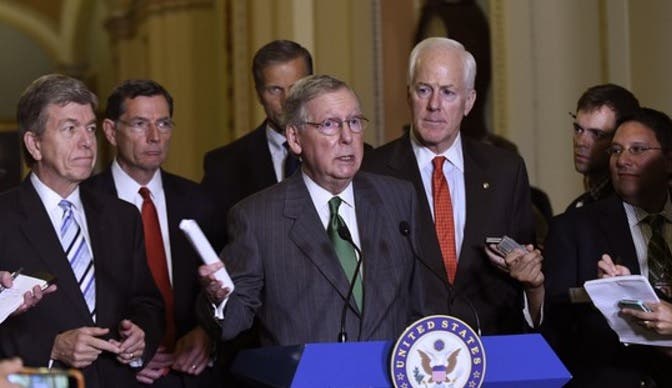 Last night, the Senate stayed in session until almost 2 a.m. solely for the purpose of adding $9 trillion dollars to the federal debt ceiling and to take the first steps towards killing the popular Affordable Care Act, which millions of people rely on for their health insurance.

Senators Elizabeth Warren (D-MASS) and Al Franken (D-MN) both spoke out as they voted against the Senate’s move in the middle of the night to gut the health care law.

Republicans have just spent the last six years doing as little as humanly possible in Congress and repeatedly shutting down the government because they claim that our federal budget deficit is too high. But last night’s vote wasn’t just about Obamacare, but what’s called a Senate Budget Resolution – think of it as a broad outline of how to manage all government spending.

Senate Republicans, therefore, agreed on this broad outline of “medicine” for America’s financial health; double our annual deficits and raise the debt ceiling by $9 trillion dollars. Yes, that’s the same debt ceiling which was previously deemed too high to ever raise as long as President Obama was in office, necessitating years of Republican-led government shutdowns. Of course, that’s not all the Republicans voted against last night in the Senate.

Democrats introduced amendment measure after measure, aimed at protecting Americans from corporate special interests, but eventually could not overcome the Republican majority.

Senator Bernie Sanders (I -VT) introduced a comprehensive amendment to make Senate Republicans hold their President-elect Donald Trump to his word and not touch the social safety net. It failed 49-49 on a mostly party line vote with only Maine Senator Susan Collins joining the Democrats.

The reality is that Republicans only have to votes in the Senate to gut the tax and spend provisions of the law, but not the items that require insurers to cover all parties and other key parts of Obamacare. Nonetheless, gutting the financial aspects of the law could lead to big problems like a mandate for coverage, but no more subsidies to help millions of working Americans to pay for their healthcare. Even worse, it’s not like you can remove the ACA and continue to have a functioning healthcare system, so it’s not just about 20 million people on the program’s medicare expansion and 6 million people using market-based programs.

Killing Obamacare altogether would dry up funding to hospitals and emergency rooms in every state in America, since the landmark legislation got rid of a patchwork of outdated regulations which were costing taxpayers a literal fortune.

That’s probably why Senate Republicans decided to work into the wee hours of the night, and when Democrats finally got a chance to say something – calling out the reasons for their votes – the meeting’s GOP chair tried to drown out their voices, lest the world listen to their shame.

Al Franken, Elizabeth Warren among the parade of Democrats drowned out when defending Obamacare. pic.twitter.com/lkhcvxM0Tw