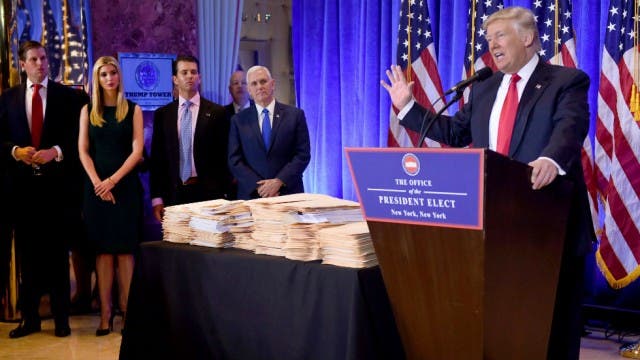 Donald Trump’s efforts at fooling the American people into believing he’s a competent leader are nothing but a pathetic charade, and nothing makes that clearer than discovering that the large pile of folders placed next to him at yesterday’s dumpster fire of a press conference were in fact all for show, and contained nothing – like Donald Trump’s promises to divest himself from his businesses. The giant stack of documents next to Trump yesterday were supposed to be evidence of “preparations” he had made for turning his business over to his sons, full of word-papers and number-stuff like a real businessman. “These papers are all just a piece of the many many companies that are being put into trust to be run by my two sons!” crowed Trump.

Of course, the papers were all blank.

The pages are blank. pic.twitter.com/agLqnBTjrg

This is the political equivalent of stuffing your clothes to make your…hands look bigger. Trump even had his staffers there cheering, giving the impression that there was a huge crowd, but it’s all smoke and mirrors.

Trump has no idea what he’s doing, and while these petty grade-school ruses go quite well with his grade-school insults, it just goes to show how desperately he’s working to convince people that he actually knows what he’s doing – and it’s not working one bit.